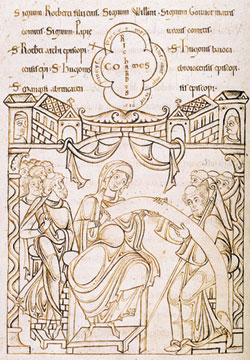 The heroine of SHADOW ON THE CROWN, Emma of Normandy, was the youngest daughter (or so we think) of Richard I, Duke of Normandy and his duchess, Gunnora de Crepon. Emma’s mother appears only in the early chapters of my novel, but she had an interesting story of her own – or, at least there were interesting stories told about her! 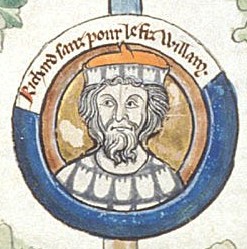 Robert of Tirgni, a monk writing in the twelfth century, records a mildly lascivious tale about how Gunnora and Duke Richard met. The duke, age 27, was out hunting and he sought a night’s lodging in the home of Gunnora’s married sister, Senfrie. Smitten by Senfrie’s beauty, Richard invited her to his bed. Senfrie, though, did not wish to be an adulteress. So she sent her unwed sister instead. (Let’s not look too carefully at the moral choices behind THAT particular decision.) Richard didn’t notice the switch until morning, which doesn’t say much for Richard’s powers of discernment, but never mind. Come the dawn he realized he’d been duped, but by that time he didn’t care. He and Gunnora were now an item.

Mind you, Richard already had two children from a previous liaison. Oh, and he was about to be wed to someone else altogether: Emma Capet. They’d been betrothed for fifteen years, from the time that the bride was only two years old. They must have known each other fairly well, as Richard was the guardian of Emma Capet’s brother, Hugh (future king of Frankia, but that was still decades in the future.) There is no question that Richard’s marriage to Emma Capet was a political one. Her father, another Hugh, aka Hugh the Great, was a 10th century mover and shaker. Through his marriage to Emma Capet, Duke Richard gained some powerful relations.

But Gunnora was no slouch in the relations department either. She was of Danish descent, from a very wealthy family with lands in western Normandy. Because Richard, too, was of Danish/Norse descent, his liaison with Gunnora would have enhanced his power among the Viking crowd that had settled in Normandy in consecutive waves since his grandfather had landed in 910.

Richard’s marriage to Emma Capet produced no children; meantime Gunnora presented him with nine sons and daughters. I can’t help wondering about poor Emma Capet, wed to a man who clearly preferred another woman. How often did she see the duke? Did she live with him in Rouen while his other family dwelt in Fecamp, the coastal town that was Richard’s favorite residence? Or was she barren simply because she never saw her husband? Their marriage ended in less than a decade, when Emma Capet died.

Once he became free to marry again, did Richard wed Gunnora? No. It wasn’t until much later, about the time that their second son Robert was an adult and about to be consecrated Archbishop of Rouen that, at the urging of his noble counselors, Richard formalized his relationship with the mother of his nine children. Apparently Richard didn’t see the need. Conjugal relations were a little loose in Normandy. Even two generations later, Duke Richard’s great grandson, William (the Conqueror) was the son of a concubine, not a church-sanctioned union.

Whatever Gunnora may have felt about her husband’s French wife, she must have been confident that she held the winning hand, for she had given Richard the sons and daughters that he needed to found a dynasty. Indeed, many of the great noble families of Normandy and England are descended from Gunnora and her sisters.

When Richard died and his eldest son Richard II donned the ducal crown, Gunnora was for many years his counselor and advisor. She was a significant force in ducal politics for decades, and for her daughter Emma she must have been a living example of female power and regency.