I’ve found that attending a Historical Novel Society conference – and I’ve just returned from my fourth conference in five years – is akin to being tossed into a blender. Faces, names, and stories all whirl around me non-stop for two and a half days. I’m continually trying to form connections, grasp insights and capture memories before they’re whisked away from me, while at the same time, jet-lagged, I’m struggling to keep my head above water. (Or soup. Or smoothie. Or frozen margarita. Choose one.) 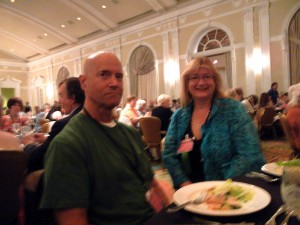 Unlike conferences that last for a week and focus on various aspects of writing, the Historical Novel Society gathering is not so much an assortment of ‘how to’ workshops as it is an opportunity to network, to find inspiration, and to share war stories.

I came away this time with numerous impressions, as well as a conviction that I returned home with far too few photos and business cards to help jolt the fading images into sharp focus. For what it’s worth, here are some of the things still tumbling about in my head from last weekend’s conference in St. Petersburg, Florida –

The beautiful Renaissance Vinoy Hotel – the perfect venue for this conference. And no, I never did 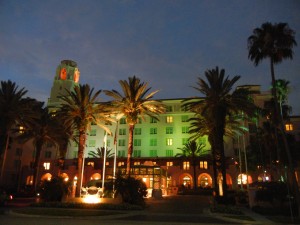 have my picture taken in front of it, but I did catch it on film the night before I left. Supposedly there’s a resident ghost – now presumably wearing the pearl drop earring that accompanied me to Florida but mysteriously disappeared before I could wear it.

Anne Perry confessing that her favorite recreational reading is Michael Connelly, whose Harry Bosch is absolutely nothing like Perry’s Victorian detective William Monk!

Jane Steen’s grin that just tickled me to pieces as she asked me to autograph a copy of my book. 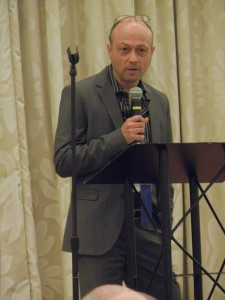 Chris Gortner speaking so movingly from his heart to touch all of ours.

Melanie Spiller’s gorgeous braids (her real hair!!!) on banquet night, and no I did not get a photo I’m such an idiot!

Mary Sharratt’s eloquence every time she opened her mouth at any of the sessions.

Teralyn Pilgrim as a very pregnant and hilarious vestal virgin.

Talking shop with Jenny Barden, Deborah Swift, and Maryka Biaggio and a dozen others over meals or drinks. 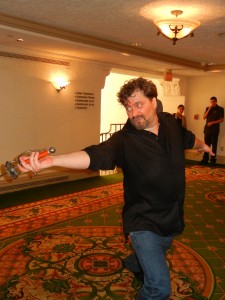 David Blixt looking like a ballet dancer as he demonstrated sword play – and it is, he assured us, like dancing. The dang Viking swords are bloody heavy, though. I was anything but light on my feet as I tried to mimic the swordmaster. 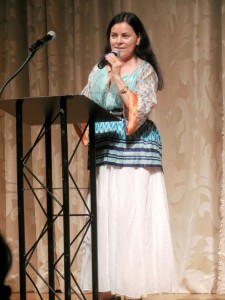 Diana Gabladon at the podium

Diana Gabaldon revealing, to my surprise, how her Outlander series began, not at the very beginning with Clare and Frank, but with an 18th century kilted warrior standing in a highland hut demanding, “Who are you?” (Och, Jaimie.) And perhaps that’s not surprising at all, now I think on it. 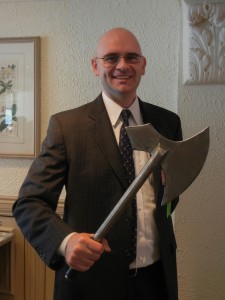 Chris Cevasco sporting a battle axe instead of that great tie. That will do.

Discussing genealogy, sign language, and  Scotland with historical researcher Jody Allen in one of the few quiet interludes. 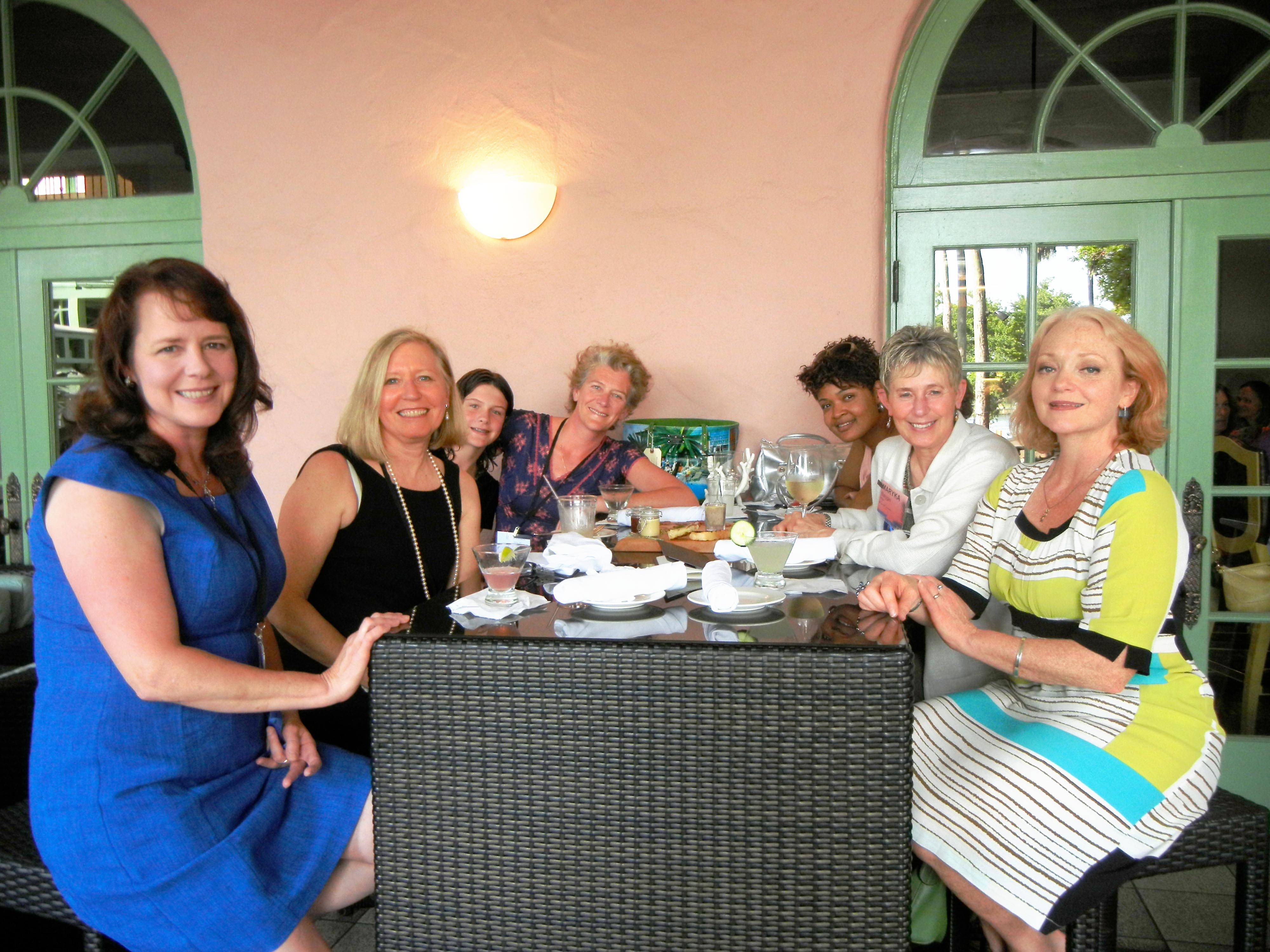 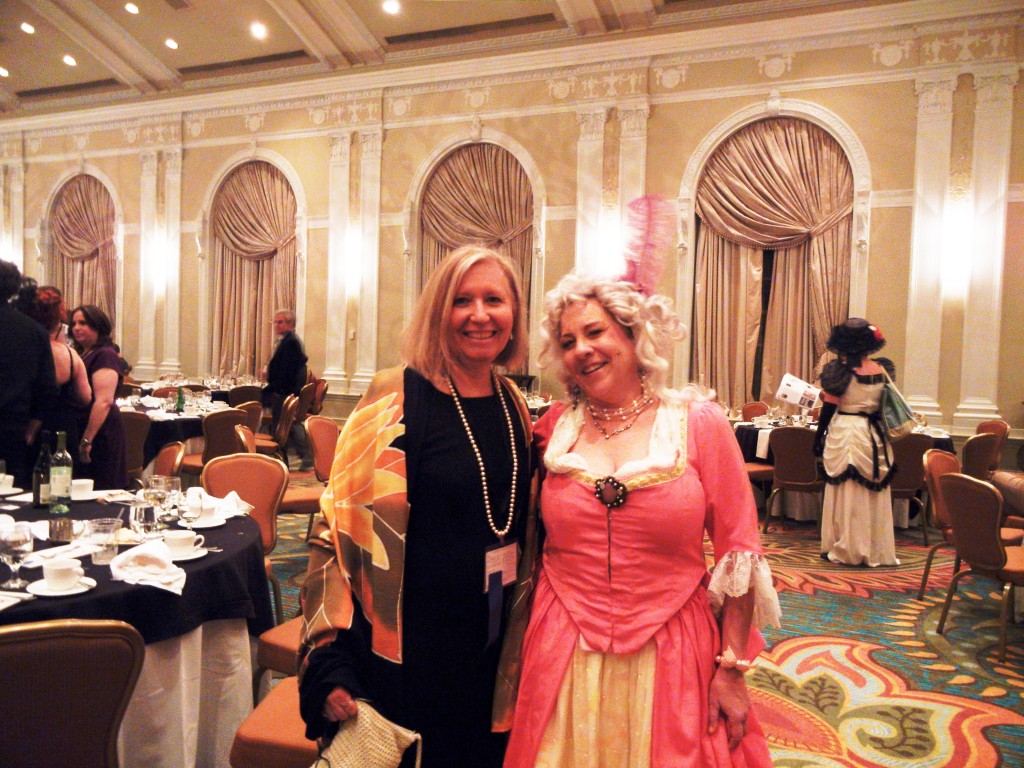 The sea of eager, curious, intelligent faces smiling at me from the audience when I told my ‘Making It’ story or offered my tiny two cents on animating the voices of women in history. (And I forgot to take pictures!!!)

Wishing that I could be in several places at once, so I could take part in all of the dinner table, bar, and veranda conversations. Or better yet, that I could stop time and movement, and walk among the gathered writers and readers to take photos at my leisure and commit names and faces and stories to heart, far better than I have.

Be advised: the next Historical Novel Society conference will be held in September, 2014, in London. Mark your calendars.

This entry was posted in Events. Bookmark the permalink.