I frequently take a brief break from my writing desk to walk around the block, having learned that getting away from my computer – and more importantly, getting my blood moving up to my brain – assists creative thinking. 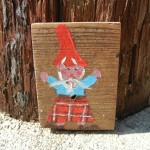 Recently, upon returning from several weeks abroad and making my first round-the-block excursion, I discovered that I had some new neighbors. While I had been away, a band of gnomes had moved in to the ‘hood. And no, this was not my brain playing creative tricks on me. These guys were real. Well, at least they weren’t imaginary. And there were quite a number of them. 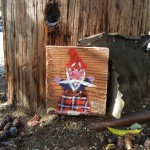 Now, the area where I live has been troubled for some time by an upsurge in robberies, leading to efforts aimed at hiring a private security patrol. Perhaps, I speculated, these gnomes were someone’s whimsical attempt at neighborhood protection – a Gnome Watch, you might say. They were certainly whimsical. 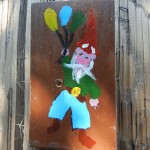 Possibly they were just someone’s art project that had gotten out of hand, but the concept of mythical creatures as guardians is an ancient one. The Greeks had their griffin, the Assyrians their shedu and the Chinese their lion – all of them guarding buildings or treasure, and scaring off bad things. And there are more recent, local examples as well. 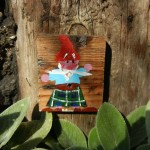 Back in 1989 when the Loma Prieta Earthquake damaged the Oakland Bay Bridge, the ironworkers who made the repairs placed, on their own initiative, a steel troll 18 inches high on the outside rail of the bridge, visible only to bridge workers and boaters. His job: to add a little extra protection from further violent acts of nature. It seems to have worked, as the bridge survived until its replacement was completed. And now it seems that the new bridge has a protector as well – a little fellow commissioned by the Bridge Authority to once more add that extra dollop of protection. 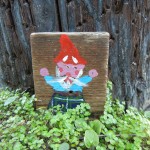 So my neighborhood gnomes – which I’m told arrived in the dead of night – may have been installed for the same purpose. True, they bear little resemblance to the bridge trolls. Indeed, they look like they’re descended from the same race that infests gardens in Great Britain; hopefully they are nothing like that pesky bunch that gave the Weasley kids so much trouble in J.K.Rowling’s The Chamber of Secrets. 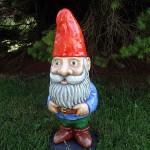 And although our new private Security Patrol has been hired, I expect that crew would welcome all the help they can get. Personally, I think my tiny new neighbors are charming. I hope they proliferate like mad. 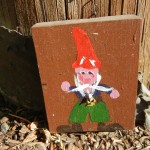 This entry was posted in Whimsy and tagged Gnomes. Bookmark the permalink.