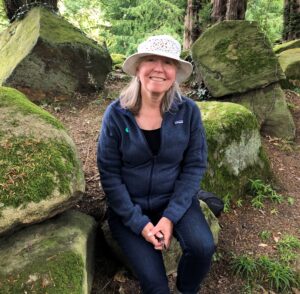 I was born and raised in Los Angeles and spent much of my childhood curled up on a sofa with my nose in a book. Usually it was a novel set in England, although why someone who grew up amid Southern California’s dry hills and sunshine would be so drawn to stories set in England’s wet, green dales is still a mystery, but there it is. We’re often drawn to what we don’t have, I suppose.

In college I majored in English Literature, but my university experience was, of course, not just about classroom study. I performed in several campus theater productions, worked part-time in a bookstore and sang with a small band in a local bar – a varied career in the space of a few years. I spent my final undergraduate semester in Switzerland and followed that with several months of travel, last stop Great Britain, where I paid homage to the places I’d been imagining for years: Dickens’ London, Austen’s Bath, Wordsworth’s Lake District, Joyce’s Dublin.

Then it was back to California and graduate school where I earned a Masters Degree and a California teacher’s credential. I taught high school English after that, and I still believe that introducing students to the basics of expository writing, to Shakespeare’s plays, and to the concepts of theme, irony and tone in literary fiction as well as being a friend, advisor and authority figure is one of the most challenging and rewarding careers that anyone could have.

Eventually I left Los Angeles for the greener landscape of the San Francisco Bay Area, where I met and married a charming Canadian. Together we raised our two sons, who are now busily forging lives and careers of their own.

In the midst of family life, though, I was actively studying the process of writing fiction – something my college courses had not really addressed. Studying literature and creating it, I had observed, were two very different things. I read books, I attended classes and workshops, I wrote short stories – a genre which seemed to demand a more morose outlook on life than I was willing to cultivate. I published a number of essays and articles, but still I was drawn towards the genre that had attracted me from the moment I picked up Black Beauty at age seven. I wanted to write a novel, in spite of the massive odds against my success, and so I set to work.

Then one day (this is the Once Upon a Time part) I came across an English queen whose name was completely unfamiliar to me. Intrigued, I began to research – more journeys to England and to France — and then I began to write the novel that would be published in 2013 as Shadow on the Crown. It is the first book in a trilogy, and the sequel, The Price of Blood, was released in 2015. The final book of the trilogy, although not necessarily my final book about Emma, released in March, 2021: The Steel Beneath the Silk.

In 2014 I was honored to serve as Writer in Residence at Gladstone’s Library in Wales where I took part in Gladstone’s Hearth Literary Festival. I have been a panelist at writing conferences in the U.S. and the U.K., and have spoken to numerous book groups and school groups about my novels and the research behind them. I love chatting with book groups, so if you are part of one, please reach out to me. Currently I am researching a new book that will continue the story of Queen Emma. It seems I’ve come full circle – my mind in England somewhere, wandering an ancient, green, Anglo-Saxon landscape while I sit here in California with my nose planted firmly in a book–only now, it’s the one I’m writing.