From Shadow on the Crown:

Æthelred, his black-robed queen at his side, led a procession of ealdormen and clergy, of noblemen, their wives, and as many townsfolk as could walk or hobble, in a solemn procession from the palace steps and down the dripping, tree-lined path that led to the Old Minster. Inside this, the largest church in England, beneath the massive golden shrine of St. Swithin, Bishop Ælfheah led them in prayers of supplication. Æthelred gazed in despair at the magnificent, gem-studded, gold-and-silver reliquary that his father had commissioned to honor St. Swithin.

He was a 9th century bishop of Winchester, a saint who was quite popular in Anglo-Saxon England. It’s claimed that he was a tutor of the young Alfred the Great. He gave gifts to the poor and needy, and was famous for building bridges and churches. He sounds a very practical man, and before his death in 853 he requested that he be buried out of doors in a humble tomb where people could walk over his grave and where the raindrops from the eaves of the church could fall upon him. Nine years after Swithin’s death the clerics at Winchester tried to move his remains inside the Old Minster, in direct opposition to his final wish. Apparently, the saint was not happy about this move and showed his displeasure by inflicting rain on England for the next 40 days. Thus the rhyme about St. Swithin’s Day and the weather:

And so, for over a century, St. Swithin stayed out of doors.

Some 120 years after his death, though, the Old Minster in Winchester was due for a remodel. The church, dedicated to Sts. Peter & Paul, had been a site of worship and pilgrimage for hundreds of years, and had undergone several periods of rebuilding since its founding in the 7th century. St. Swithin was prayed to there, and in fact the minster was hung about on both walls from end to end with the crutches and stools of the crippled who had been healed by the sainted bishop.

In the 970s, during the reign of King Edgar (AEthelred’s father), the Old Minster was enlarged. On July 15, 971, a more determined bishop successfully translated St. Swithin’s remains into the nave where they were placed in a shrine made of gold, silver and precious gems. The church was re-dedicated, this time to St. Swithin himself. Work on the church continued, and by 1000 it was the largest church in England and possibly in all of Europe. It had a cloister, a refectory, a dormitory, a royal scriptorium, a plumbing system and a massive organ that needed 70 men to operate it. It had a vast side chapel that rivaled Charlemagne’s great octagon at Aachen. There was even an upstairs throne room where the king could view the Mass and be seen by his subjects. 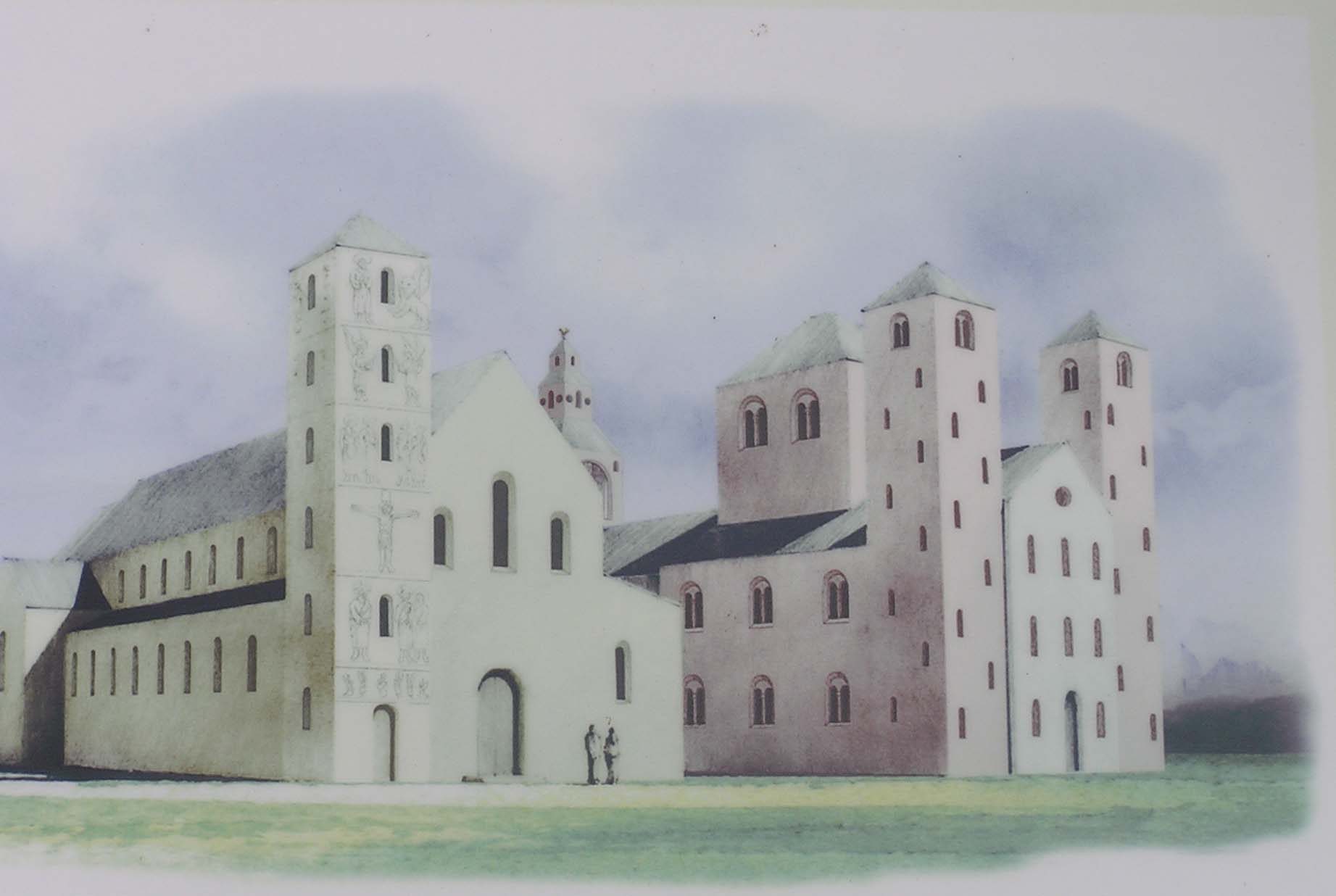 The Old Minster is the church on the right.

Some time later bits of St. Swithin were sent to other churches in England. His head went to Canterbury. An arm went to Peterborough Abbey. Most of him, though, remained within the Old Minster, and when, in 1093, a Norman cathedral was built (the one you see in Winchester today), the shrine was placed behind and above the high altar. The cathedral today is still dedicated to St. Swithin, but he has to share it with the Holy Trinity and those old stand-bys, Peter and Paul.

St. Swithin was revered throughout the Middle Ages, and there are still churches all over England dedicated to the saint. In London there was a St. Swithin’s church in Candlewick Street (now Cannon Street) from the 13th century until modern times. The fire of 1666 destroyed it, but a new St. Swithin’s, designed by Christopher Wren, took its place. The church, alas, did not survive the bombs of WWII. At war’s end only the pulpit was salvageable, and the church’s ruins were finally demolished in 1962.

In Stavanger, Norway, there is a cathedral dedicated to St. Swithin. It is the oldest cathedral in Norway, founded in the early 12th century by a bishop who may have hailed from Winchester and so have had a fondness for the Old Minster and his hometown saint.

And what happened to St. Swithin’s shrine with its precious gems and gold? Henry VIII happened. On 21 September, 1538, in the dark of night, Henry’s minions demolished the shrine, scattered Swithin’s bones, and made away with everything of value. And St. Swithin, it would seem, could feel the raindrops fall upon him once again.