It is nearly Twelfth Night (January 6, thank you, King Alfred) when we will have to put all thoughts of Christmas behind us for another year. Before we do that, though, let us consider what Christmas might have been like for the southern colonies in early America. 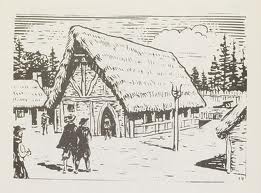 Jamestown was founded in April, 1607, by members of the Church of England. Their first Christmas was not recorded, possibly because by Christmas of that first year, only 38 of the original 104 settlers were still alive. But the intrepid John Smith describes a 1608 Yuletide feast of shellfish, meat and poultry that was celebrated outside the settlement among the Indians by Smith and a dozen companions who were foraging for food. So, bleak as it may have been, Christmas was observed in early Virginia.

Bracewell Ghost of Xmas Past

Except for Pennsylvania, where the Quakers initially did not regard Christmas as a holiday, the later colonies celebrated Christmas with the traditions they brought with them from the old world, whether they were Dutch or English, Polish or Portuguese. As the colonies became a melting pot of nationalities and religions, the earlier Puritan prohibition against celebrating Christmas faded, and even in Boston folk kept Christmas however they wished. Thomas Jefferson described his 18th century Virginia Christmas as “a day of mirth and jollity”.
By the time President Grant declared Christmas a Federal holiday in 1870, the kinds of excesses that had offended the Puritan settlers no longer characterized the feast. And now we have arrived at the Christmas celebrated by Louisa May Alcott and the March girls, a time of nostalgia and hope, of family warmth and communal ties, of tradition and good cheer. It would become the Season of Shopping soon enough.