In the early middle ages any journey by ship across a vast expanse of water would have been dangerous. The Narrow Sea, that we know today as the English Channel, was no exception. In the year 1009 a fleet of 80 English ships was destroyed when “there came against them such a wind as no man remembered, the ships were beaten and dashed in pieces” according to the Anglo-Saxon Chronicle. The loss of almost an entire fleet would have a significant impact on events in England in the years that followed.

But in 1120 the loss of just a single ship also had a devastating effect on England. The White Ship was the swiftest and most modern vessel in the royal fleet of Henry I, King of England and Duke of Normandy. As you might imagine, Henry made frequent journeys back and forth across the Channel for the purpose of governing his two realms. In November, 1120, he arrived at the port city of Barfleur, Normandy, intending to take ship for England with a large retinue that included his heir, 17-year-old William Ætheling, as well as four of Henry’s illegitimate sons and daughters and many of the heirs to some of the noblest families in England and Normandy.

The Master of the White Ship requested the honor of taking the king across the Channel, but Henry chose to board his usual vessel. He proposed, though, that his children and their companions take the newer, faster ship–the White Ship. So, on November 25, the king set sail in daylight, while the White Ship, delayed by the revelry of its passengers, did not leave port until after nightfall. There were 140 knights and 18 noble women on board, as well as barrels of wine and a party atmosphere.

The story goes that William Ætheling wanted to outpace his father’s vessel and arrive in England first, so the White Ship, instead of sailing northeast to avoid the rocky shoals along the Norman shore, headed due north. Many factors could have played a role in what happened next: the tide, the darkness, the free-flowing wine or all of the above. At any rate, the ship foundered on the rock of Quillebeuf, its hull ripped wide.

They were a mile and a half from shore, and in the dark the three hundred men and women on the sinking ship had little hope of rescue. William’s quick-thinking body-guard tumbled the prince into the only life boat and began to row towards shore, but William ordered him to turn around and rescue his brothers and sisters. Too many desperate victims, though, tried to clamber aboard the small boat, and it capsized.

The only survivor of the White Ship was neither prince nor knight, but a butcher who managed to cling to a spar. For weeks, bodies would wash up along the Norman shore.

The sinking of the White Ship was a tragedy for England, even beyond the loss of so many of its noble youth, for William Ætheling was a symbol as well as a prince. Descended on his mother’s side from King Aethelred II of England, and on his father’s from Duke Richard II of Normandy, he united the pre-Norman, Anglo-Saxon dynasty of Wessex with the new Norman line founded by the William the Conqueror. 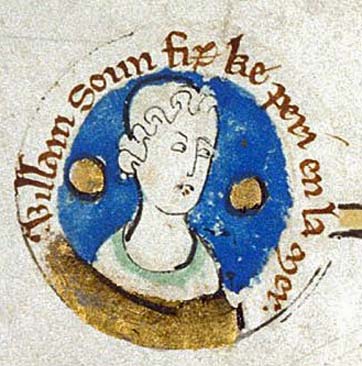 He was also his father’s only legitimate male heir. His sister, Mathilda, would try to step into their father’s shoes, but many in England were not yet ready to accept a woman on England’s throne, including Mathilda’s cousin, Stephen. He claimed the prize first; she objected. For eighteen years civil war would rage in England – a high price to pay for the loss of a single White Ship off the rocky Norman coast.