A Personal Reflection on Fatima 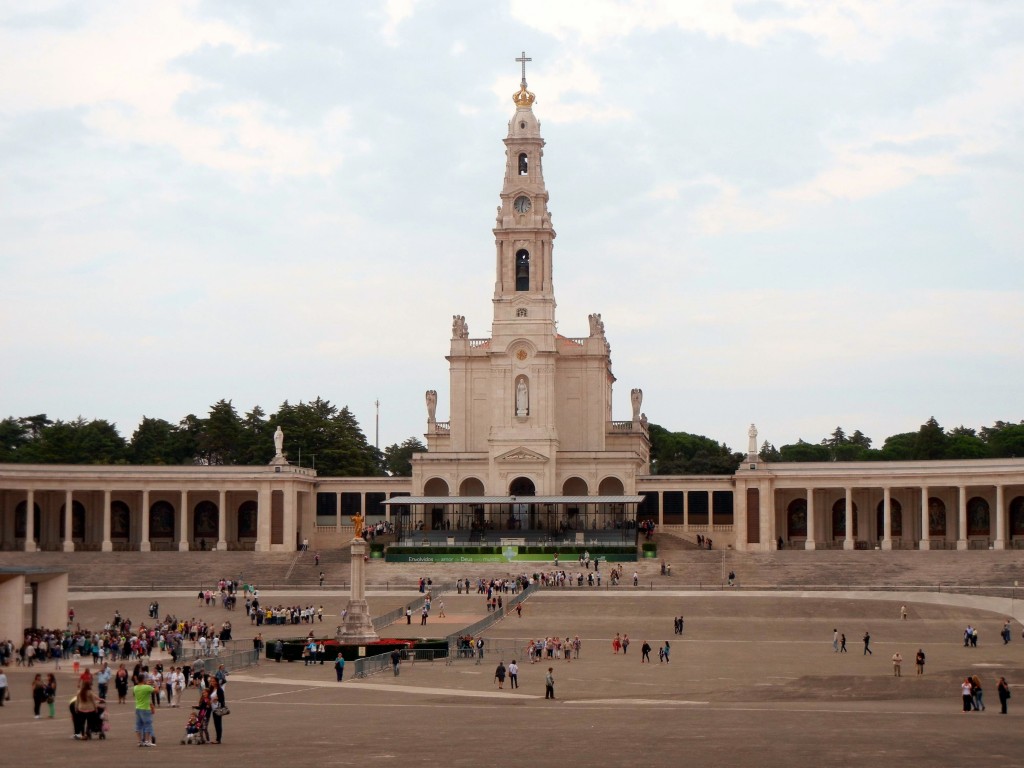 The old basilica at Fatima.

I never intended to visit Fatima when I planned my recent trip to Portugal, mostly because I had no notion of where Fatima was. My husband and I were flying to Europe at the invitation of friends to spend a week with them near Sintra. Although we would be staying in Portugal for a week beyond that, I hadn’t had an opportunity to do much in the way of research before I left home, so I landed in Lisbon with a paper thin understanding of Portuguese geography, history and society.

After our week in the south, though, as I was eyeing a map to familiarize myself with the route we were about to take, I realized that we would drive within a few miles of Fatima. Decision made: We’d have to stop.

I was in grade school when I first learned about the miracle that took place at Fatima.  The story of the Blessed Virgin’s appearance to three shepherd children is one that every Catholic school child hears over and over. It goes something like this:

In the spring of 1917 Lucia, Jacinta, and Francisco, aged 9, 7 and 9 respectively, were tending sheep when an angel appeared to them on three separate occasions. They told no one what they had seen, but on May 13, a Lady appeared, brighter than the sun, amid the branches of an oak tree. The children couldn’t keep this to themselves, and when they first spoke about what they’d seen they were interrogated by priests, village elders and church officials. They were accused of lying, of course, but they persisted in their story. The Lady appeared to them three more times, and each time she urged them to prayer and sacrifice for the sake of sinners. She told them three secrets (I was always fascinated by the idea of these secrets), one of which the Vatican kept under seal until 2000. She also promised that a miracle would occur on Oct. 13 so that people would believe that the children had actually seen the Blessed Virgin. So, on that rainy day in October, 1917, over 30,000 people gathered at the oak tree, and at the appointed time the clouds parted, and witnesses swore that they saw the sun whirling in the sky. The sun, they said, danced. It was the Miracle of the Lady of Fatima, and it brought consolation to a war-weary world.

I was recalling this story as we approached Fatima. My childhood belief in the truth of the children’s vision, though, was tempered now – somewhat ruefully – by my 21st century adult skepticism. I would be visiting Fatima as a tourist, not a pilgrim.

Apparently I was not alone in this. The parking lot was sprinkled with picnic tables where families ate, drank, and laughed; where young children played soccer among the cars – clearly on vacation or enjoying an outing. There was nothing devotional in their attitudes. As we drew closer to the new basilica, though, buses disgorged groups that made straight for the church, presumably to attend one of the many liturgies celebrated there every day.

We had come on one of the quiet days. There were only about a thousand people there, my husband estimated, on the esplanade or attending services either in the new basilica or the outdoor Chapel of Perpetual Adoration. Many more thousands would throng the Sanctuary of Fatima on the 13th and 14th of each month, and on the 13th of October each year the crowds would number in the millions.

My first impression of this pilgrimage site was of the new basilica – an enormous, white block of a building that looked more like an auditorium than a church because we’d come upon it from the back. 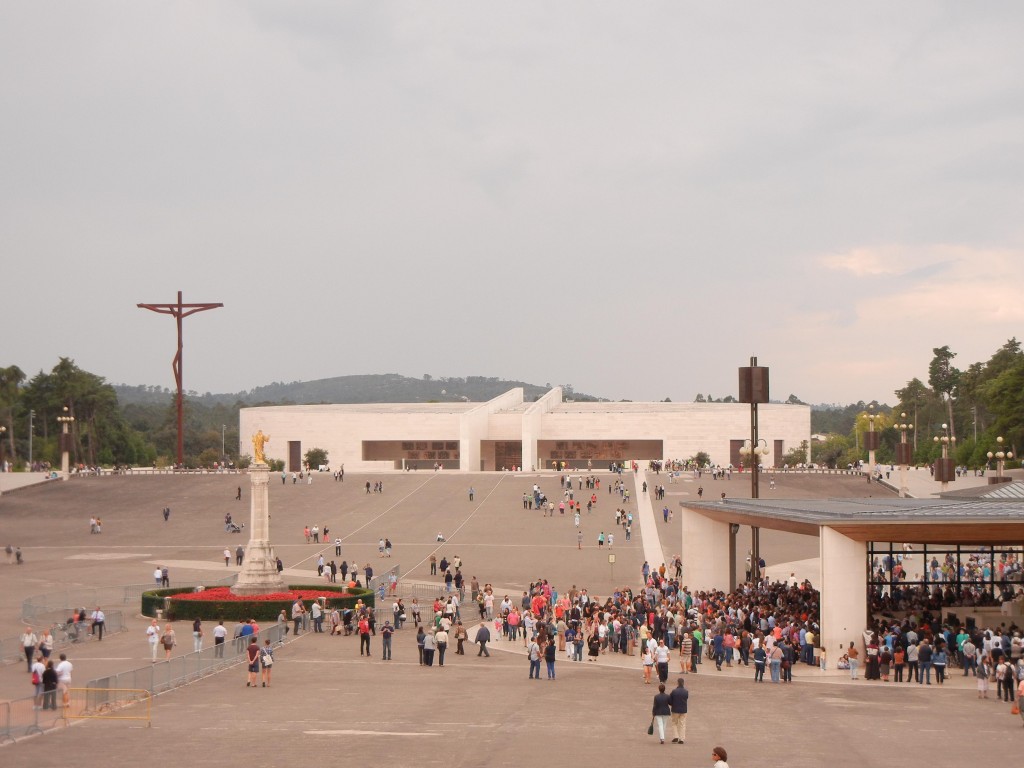 The new basilica at Fatima.

We had to walk around it before we could get a visual impression of the entire sanctuary – the massive new basilica and the gracious old one facing each other across a vast esplanade. Structures skirted the left and right sides of the esplanade, but my eyes were drawn to the old basilica – a beautiful white church flanked by colonnades that seemed to embrace the pilgrims moving towards it.

We did not stay long at the sanctuary, but several images remain with me from our brief visit: a woman on the esplanade standing beside the statue of Pope John Paul II, gently touching his hand, gazing up at him with obvious devotion, her lips moving in prayer or conversation; a woman making her way to the old basilica on her knees; the faces of petitioners, young and old, lighting long, beige-colored tapers at the inferno, sometimes with the help of a companion, sometimes as many as three or four candles at once, each candle presumably bearing a prayer or a petition. 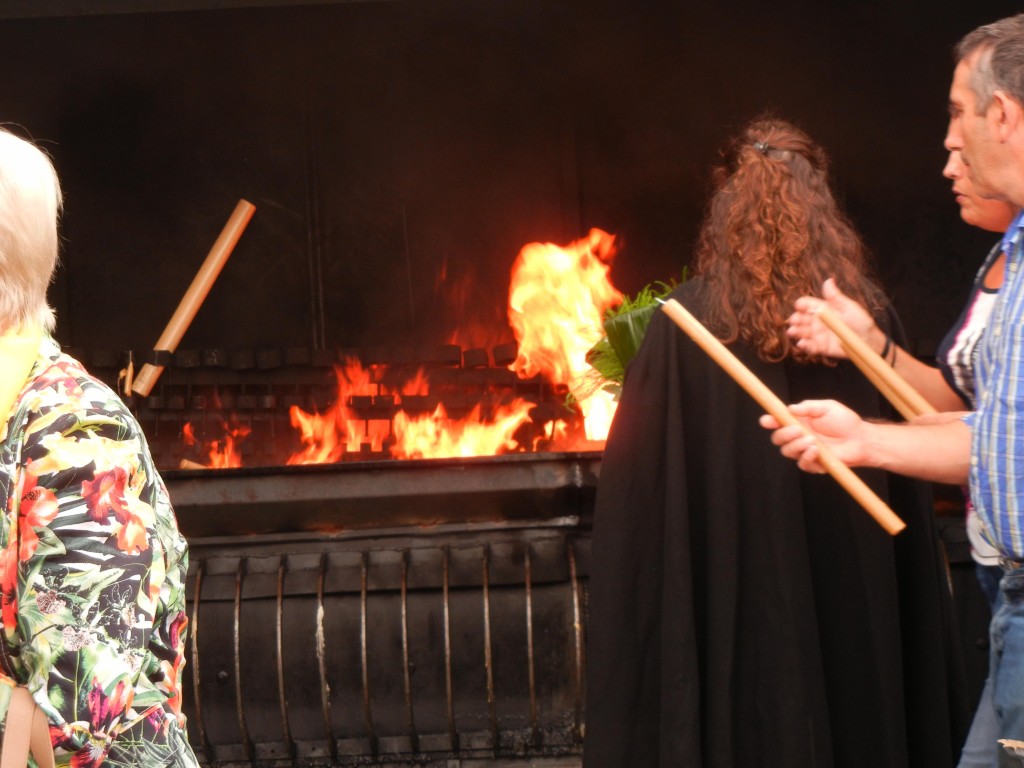 I also have to confess to a not very pious thought as I made my way from the new basilica to the old. It seemed to me that for a site dedicated to a woman, images of men seemed to be in the majority in the form of statues of popes and of Christ; 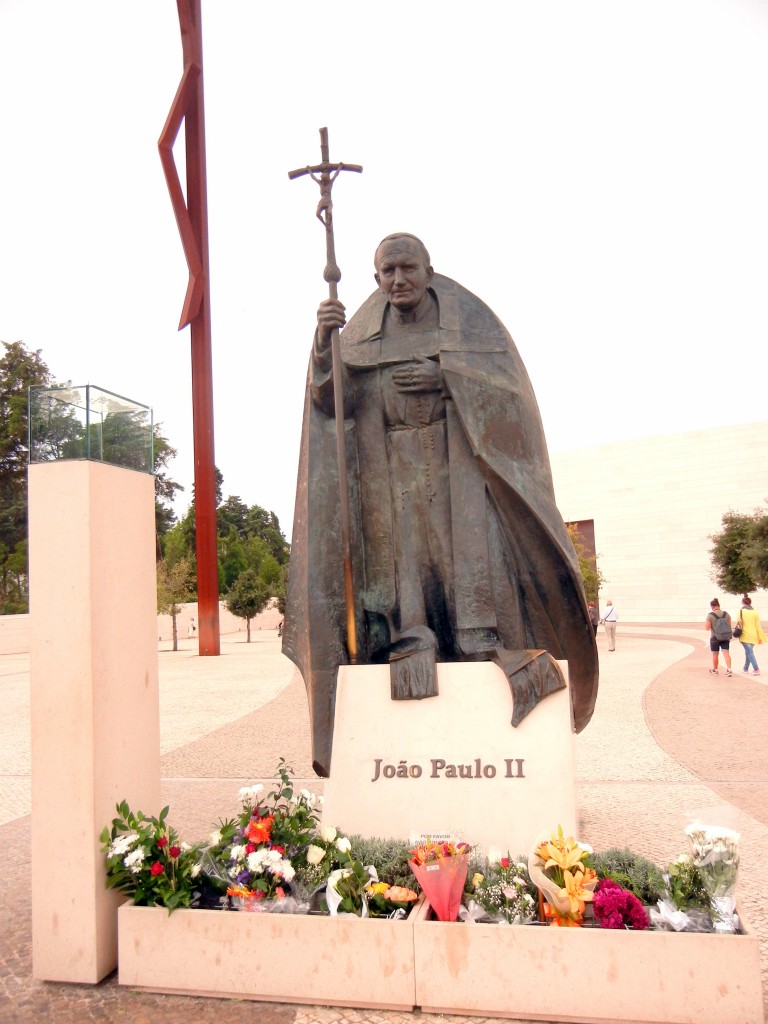 in the massive crucifix on the esplanade; in another huge crucifix inside the new basilica; and in the men who celebrated the sacred rites. 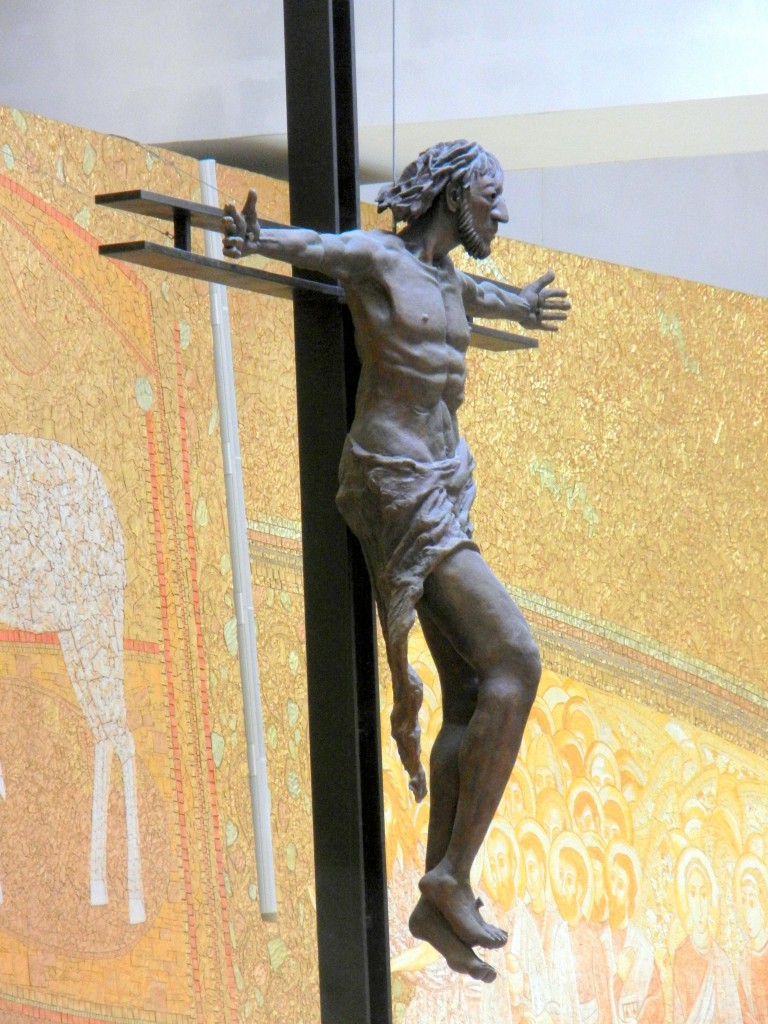 Mary’s image seemed to be confined to a small statue next to the tiny Chapel of Apparitions (built here in 1919), and another in a niche high on the face of the old basilica. 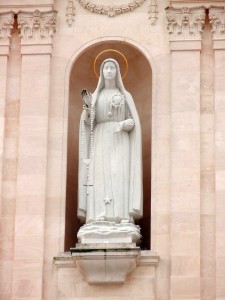 I couldn’t find any other sign of her. Granted, she must have had more of a presence in the old basilica (built over the course of 25 years and consecrated in 1953), but that beautiful church was under renovation and I could not go in even though it was what I most wished to see.

The tree is still there, set apart from the chapels and the selling of candles and mementos. It was serene there, and that was where I offered my own small prayer to the Virgin. 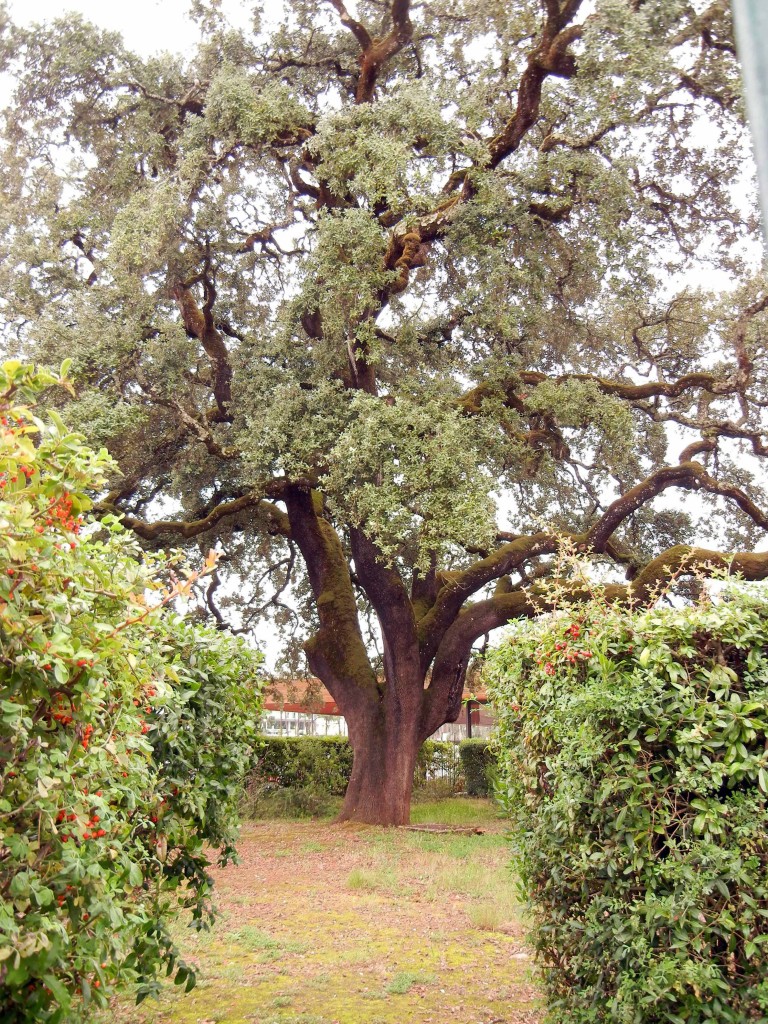 Of the children, two of them – Francisco and Jacinta – would not survive childhood. Within two years they both succumbed to the influenza epidemic that swept Europe after World War I. They are buried in a special chapel in the old basilica (open despite the renovations), their youth and innocence captured in the artwork adorning their resting places. Both were beatified in 2000. 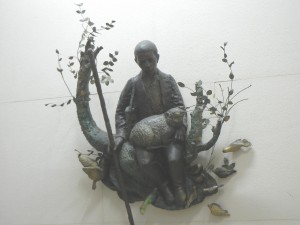 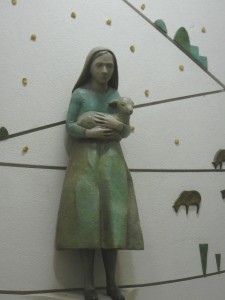 Their companion, Lucia, entered a convent to spend her life in prayer and contemplation. She met popes and heads of state, she saw the first basilica of Fatima, and she wrote several memoirs about her visions. The final years of her life were spent in darkness and silence, for she was blind and deaf due to illness and age. The day that she died in 2005 at age 97 was declared a national day of mourning in Portugal.

Fatima left an indelible impression upon me, and ever since my visit I have been pondering the events that occurred there in 1917. My skeptical self does not know what those children saw in the branches of the oak tree, or what the crowd witnessed in the sky on that Oct. 13. They saw something, I am convinced of that. This was no hoax perpetrated on a trusting world by mischievous children. If anything they were pious, not mischievous. Could it have been a miracle, or did the apparitions spring from their overactive imaginations? A great many men and women, whose faith is stronger than mine, discount rational explanations. They believe that the children saw the Blessed Virgin.

I no longer have the unshakeable faith in miracles that I had in childhood. I am left only with hope. I hope that the visions witnessed at Fatima were true. And as I consider the challenges that humanity faces – the conflicts, the plagues, and the threats posed by nature that we have brought upon ourselves, I find myself wishing that the Virgin would come again, and that she would bring a promise of peace and consolation to a world still in sore need of it. If she should do so, I wonder how many of us, including me, would believe it.

2 Responses to A Personal Reflection on Fatima