The Riddle of the Stones

They had arrived at last at a long, low ridge where the standing stone, its edges scored in primitive runes, pointed skyward. Athelstan checked his horse beside the ancient, lichen-covered stone. Gazing into the shallow vale beyond, he caught his breath at what he saw: a circle of what he guessed must be a hundred standing stones, each one the height of a man or a little more, mushroomed from the valley floor. Like monstrous, deformed fingers, black against the blanket of snow, the stones cast long shadows that speared, ominously, straight at him…He realized with a shock that what he had taken for another stone, standing in the gloom near the hut, was a living figure staring back at him.

She had been waiting for them, then.

from Shadow on the Crown

When I first began thinking about the story that would become Shadow on the Crown, I had in mind a scene in which the king’s eldest son would consult a seeress who would predict that he would never be king. Once I started gnawing on this idea, I began toying with a dramatic setting for their meeting, and that started me thinking about Britain’s stone circles.

Many years before, I had visited a stone circle, Castlerigg in the Lake District, in Keswick. My companion and I had been following a footpath, the signs leading us through a forest and then a field until the stones appeared in front of us, looking eerily out of place there – as if they’d been dropped from outer space. It’s difficult to put into words how moving and strange that experience was. 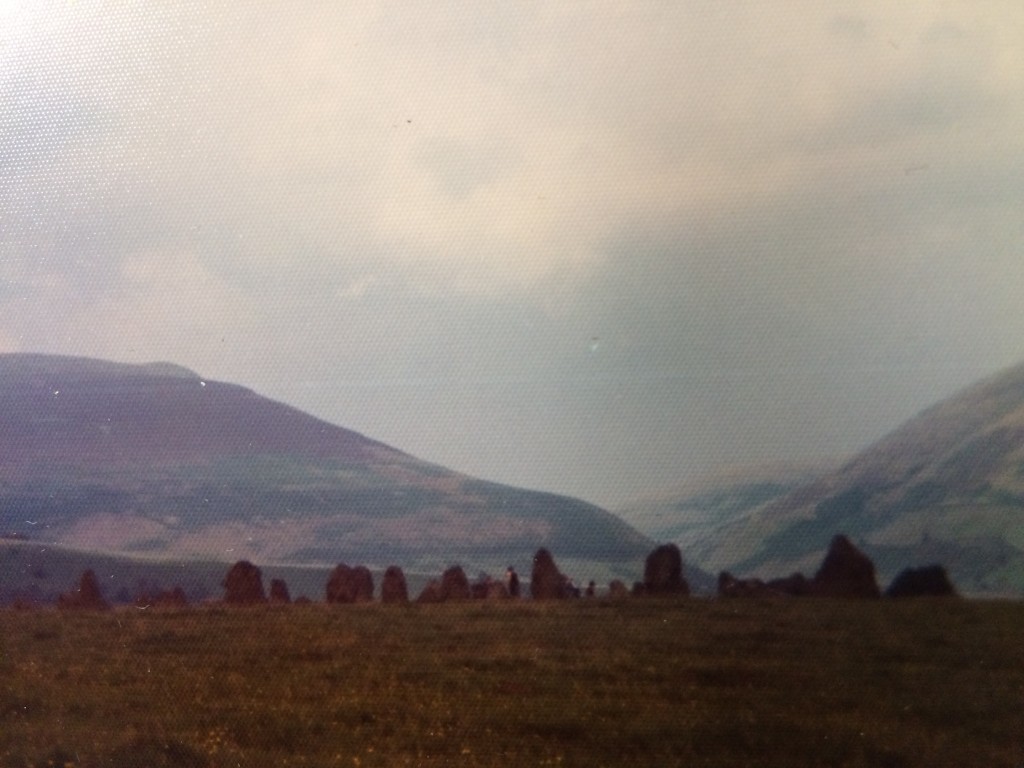 But I couldn’t use Castlerigg in my novel because it was too distant from Wessex where I knew that most of my story would take place. The stones had to be further south. I turned to the internet for help, and that’s when I found the Rollright Stones and the setting for what turned out to be several scenes in both Shadow on the Crown and The Price of Blood. 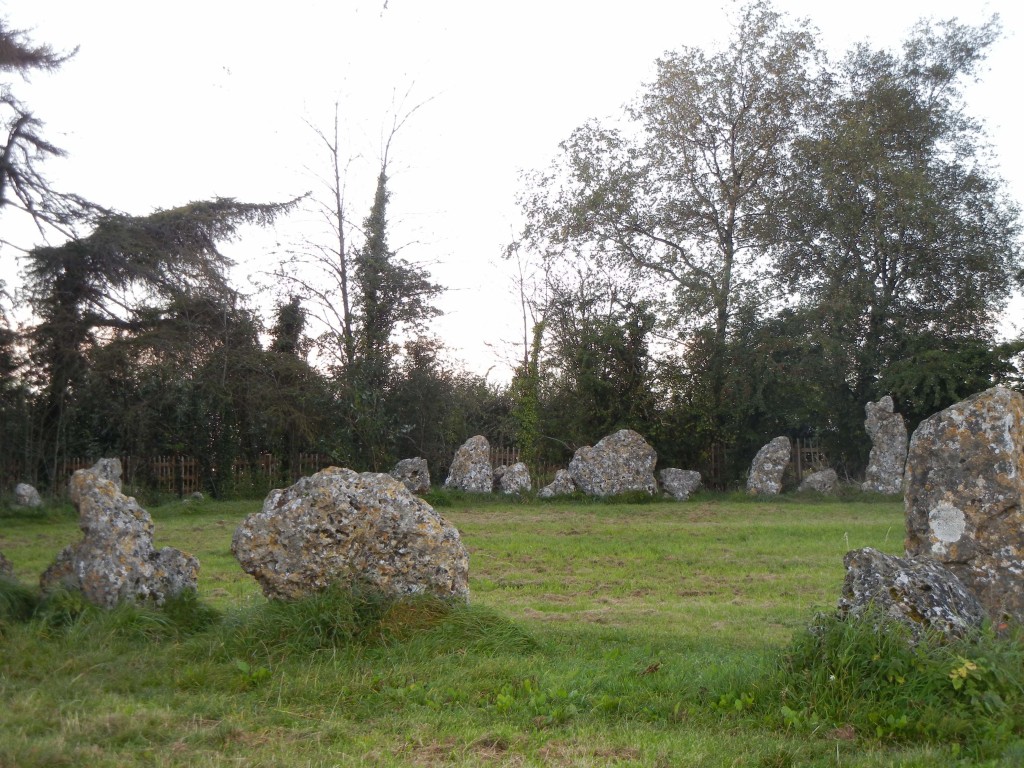 The circle, called The King’s Men for centuries, dates back to at least 2000 B.C., and it probably looked somewhat different in the 11th century than it does today. Whether it looked the same then as when it was first erected – archaeologists speculate there were 105 stones standing shoulder to shoulder, with a narrow entrance way flanked by two stones on either side of it – well, that’s anybody’s guess. 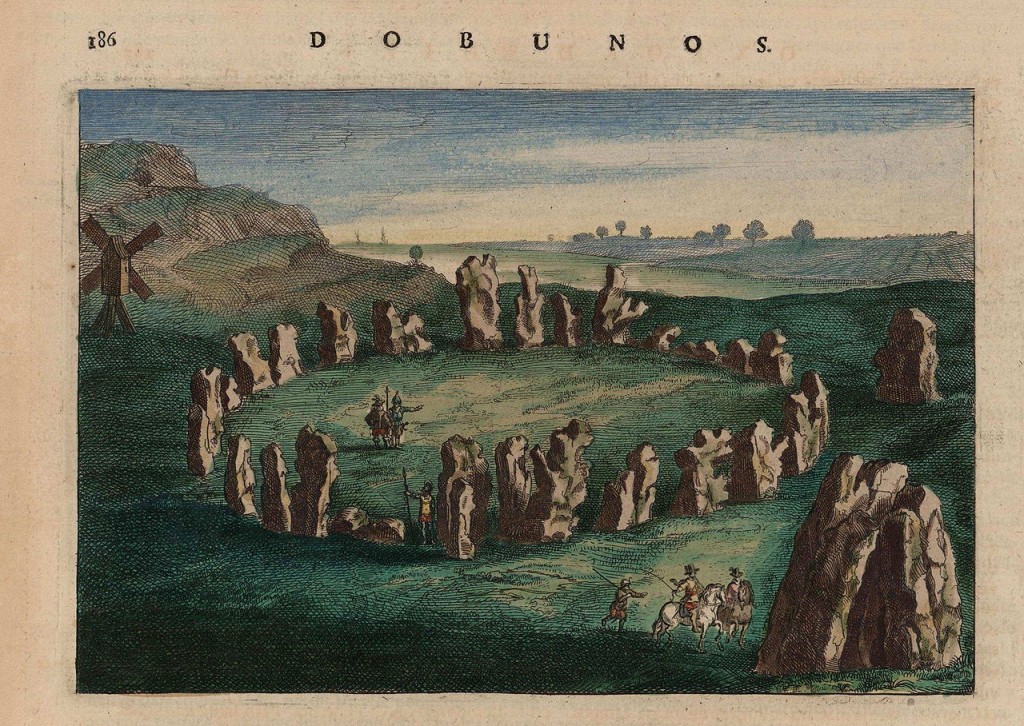 A short distance from The King’s Men is a single standing stone called The King Stone, probably placed there a thousand years after the circle was erected. 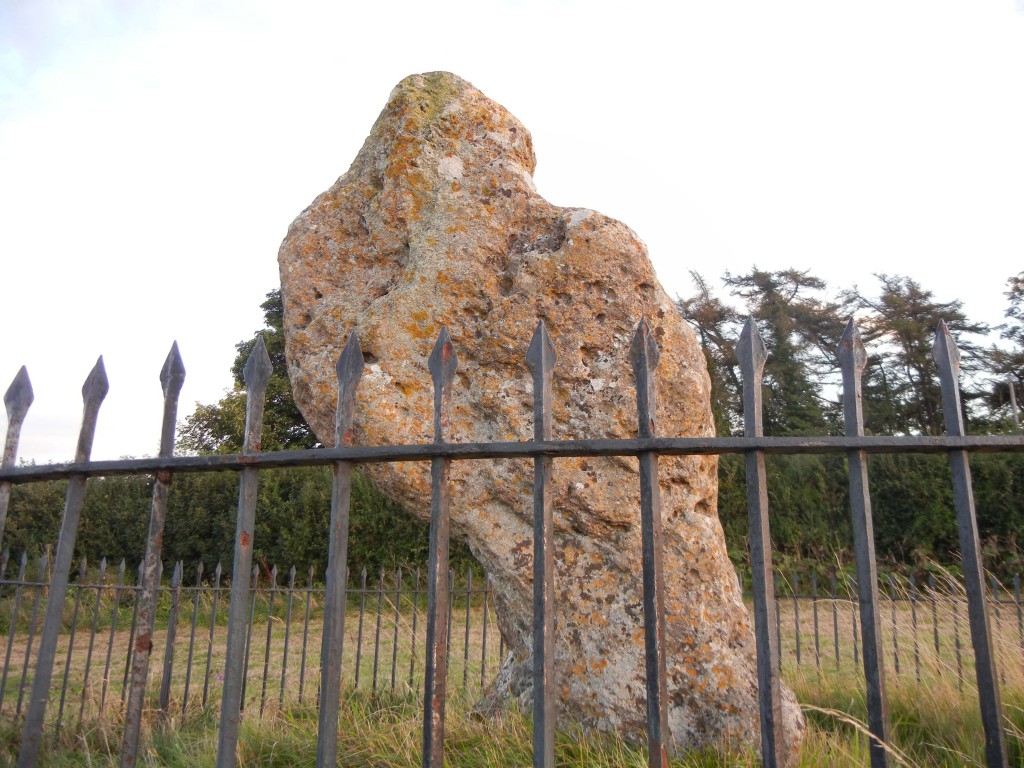 Today, if you stand at The King Stone, as Athelstan does in the quote above, you cannot see the stone circle. There are trees in the way. I’ve imagined the scene without the trees. That’s poetic license, I confess, although, again, who can say what the flora was like there in the 11th century? The runes that I describe carved on the stone are poetic license as well, although because the stones are now so worn and bits of them chipped away by souvenir hunters, once again we cannot know what it looked like a thousand years ago.

There is a third megalithic monument in the immediate area and it is within sight of the stone circle, although distant enough that today it looks like a pile of boulders. When I visited the site there was a field of grain separating The Soldiers Men and this group, called The Whispering Knights. The Whispering Knights group is probably the most ancient of the monuments, dating back to perhaps 4000 B.C. It consists of five massive stones that once were part of a burial chamber, or dolmen. 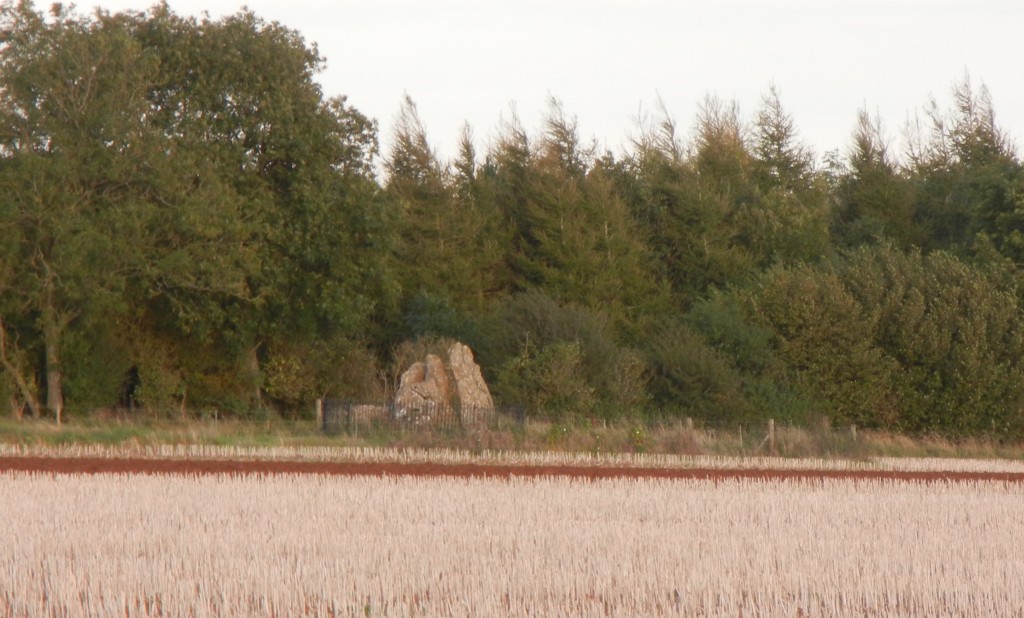 Originally there were more stones, and it would probably have looked something like this one in Wales. (Pentre Ifan) 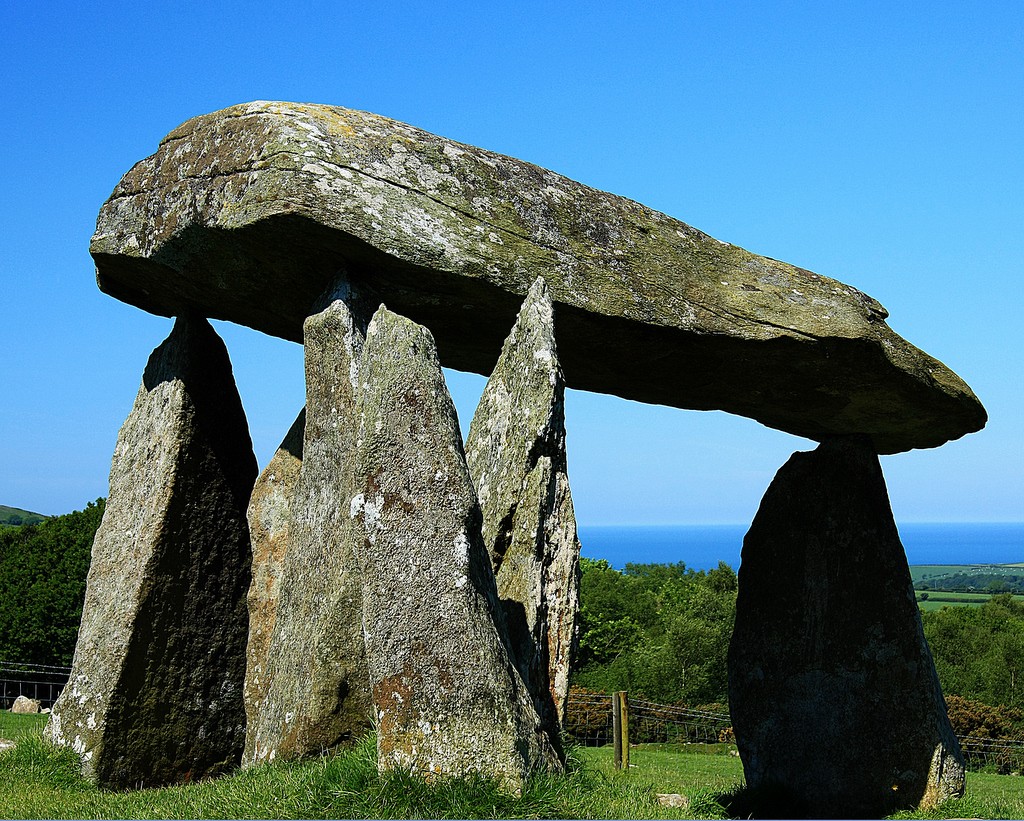 No one can say when the capstone fell or when the missing stones were hauled away and put to some other use. In my story, Athelstan is too focused on the woman standing near the stone circle to even notice the dolmen, even if it was there intact. 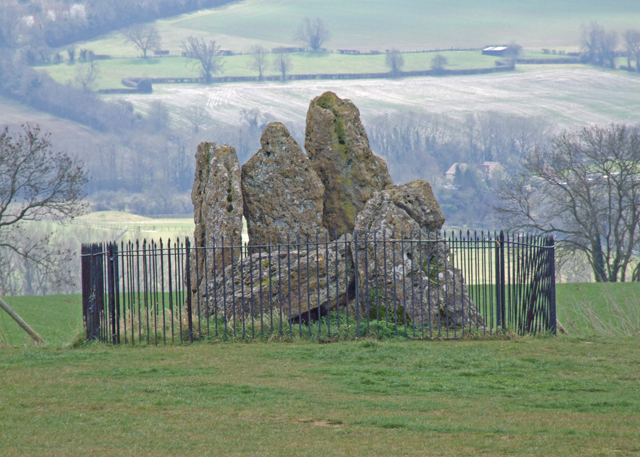 Would there have been a seeress at the site of the Rollright Stones in the 11th century? I don’t know. The wise-woman who speaks to Athelstan in my book was my own creation, but such women did exist then. Pagan beliefs still lingered in England, although they were frowned upon by the church. In Archbishop Wulfstan’s most famous sermon he claims “here there are witches and sorceresses”, and during Æthelred’s reign at least one woman was drowned in the Thames for witchcraft.

A recent discovery, though, suggests that the stones were a sacred site well into the Anglo-Saxon period. Recently an ancient grave was discovered near the King Stone. It contained the remains of a 7th century Saxon woman. The grave goods buried with her included silver coins, a large amber bead, and a rock crystal amulet on a chain. The Anglo-Saxons believed that amber was a talisman against evil. Rock crystal, too, had special properties and was a symbol of clarity and light. It’s early days yet, but the experts studying the site believe she was someone of substance, and the position of the grave near the King Stone and the amulet-like nature of the grave goods suggest that she may have been a wise woman. So, quite possibly, there was a seeress at the stones, at least in the 7th century.

In writing historical fiction an author sometimes walks a very fine line between truth and fiction. Research into the period and events causes us to speculate about what might have been, and to turn possibilities into story. It seemed to me that if today we are awed by the sight of an ancient circle of stones, people who lived a thousand years ago must have experienced that same awe, probably to a far greater degree. So, settling a wise woman beside the stones in this place that we still regard with wonder, struck me as logical and perhaps even accurate. As it happens, such a woman did dwell near there, at least in the early Anglo-Saxon period. Perhaps, during a time of turmoil and trouble, a warrior sought her out, gave her silver, and bid her look into her crystal stone and speak to him of destiny.

Read a news item about the grave of the Saxon woman HERE.
Read an earlier post about the Rollright Stones, Standing Stones & a Witch.