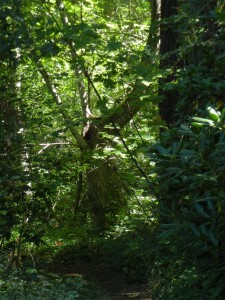 When I go to Ashland for the Oregon Shakespeare Festival, my days begin with an hour’s walk through Lithia Park. I come across other early risers walking or jogging through the leafy glades , and frequently they are in groups of 3 or 4, avidly discussing whatever play(s) they attended the previous day. Does that happen anywhere else besides Ashland? I doubt it.

At any rate, this summer Lithia Park invaded Ashland’s Elizabethan Theater, to the delight of the audiences who were lucky enough to see it.

Three plays were performed in rotation on the outdoor stage that resembles Shakespeare’s Globe.

For 2013 the plays were”The Heart of Robin Hood”, “Cymbeline” and “A Midsummer Night’s Dream”. Set designer Michael Ganio, charged with creating Sherwood Forest, the wilderness of Wales and Oberon’s fairy woodland, decided to create a basic set that would work for all three plays: he created the suggestion of a forest on the stage. One of the delights of attending the performances in sequence was in seeing how the set was transformed for each play.

For “Robin Hood” there were rope ladders leading from one level to another, musical instruments sprouting from tree bark, and above it all, a huge golden ring that served as Robin’s private man-cave.

The Welsh forest of “Cymbeline” seemed to invade the king’s palace. Cymbeline’s throne looked like one of the boulders in Lithia Park — a huge rock that had been dragged on to the stage and chiseled into the shape of a chair. The bed frame of the wicked queen crawled with twisted, thorny tree limbs while the bed of the  innocent Princess Imogen was bedecked with white roses. (I wish the queen’s wicked bed had been on the stage for far longer than it was. It was awesome.)

For “A Midsummer Night’s Dream” Ganio and video artist Alexander Nichols collaborated to create the most magical setting of all. I have no idea how they did it, but before our eyes brightly colored vines and flowers climbed up every vertical space on the set and bloomed in the windows. The color palette changed from cool blues and purples to warm reds and golds as the temper of the scene changed. Or stars suddenly glimmered above the trees in a midnight blue sky. It was dazzling.

I have seen many plays in Ashland’s Elizabethan Theater, having attended the festival at least a dozen times. I have always been impressed by the sets, the costumes, the actors and the ingenuity of the directors — from the classically presented “Henry V” to an “As You Like It” performed as a rollicking musical Western. I understand that the play’s the thing.

But this year I felt that the plays chosen for the Elizabethan stage — and especially the set designed for them — transported me for 3 wonderful evenings to a magical, mythical world.

It was damned difficult to leave it behind.