Readers of historical novels are often curious about the research that goes on behind the scenes. After listening to an exerpt from my novel about Emma of Normandy, Shadow on the Crown, a friend asked if I’d researched everything at the beginning or if I was researching as I went along.

The answer to that is, “Both.”

In 2001 I began to read history in preparation for the novel that I thought I might one day write. Over the following four years I studied 11th century Europe in general, read up on England and Normandy in particular, and devoured academic biographies of my major characters. I wanted to learn all that I could about their family histories and the world in which they lived. This was before I even began to think about how the story might take shape.

In 2005 I made some notes about where to begin the book that I had titled Richard’s Daughter, and today, as I re-read that journal entry, I realize how much I had already absorbed about the world that I hoped to bring to life. But I spent two more years researching before I wrote that first sentence, and by then I’d given the book its second title: Royal Hostage. 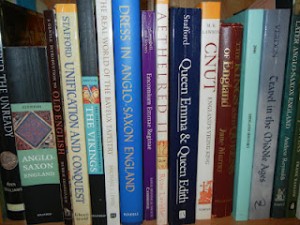 A few of my books

Since then the research has never stopped. In 2007, with the first half of a rough draft completed, I took a two-week summer course at Downing College, Cambridge, entitled Kings and Vikings: Power, Poetry and Politics in Anglo Saxon England. We were assigned eleven books to read for that class, although now my research titles number well over a hundred. 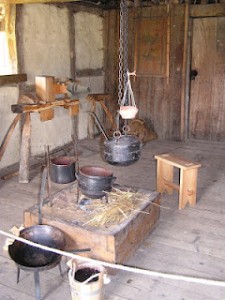 But I was doing more than reading books and listening to lectures at Cambridge. There were also  trips to the British Museum, to the Anglo-Saxon ship burial at Sutton Hoo, and to the village of West Stow. Many of the objects I saw on those visits found their way into the pages of my novel.

Even before I took the bus from London up to Cambridge I had been in Europe for several weeks, exploring Normandy and the area in southern England that the Anglo-Saxons called Wessex. Because I had determined that in the course of the novel Queen Emma would journey from Winchester to Exeter I had spent weeks at home working out every abbey where she might stop along the way. Of course, I wanted to make that journey for myself, so over the course of two very long days on the road, my husband and I drove the route that I imagined would take Emma several weeks. The abbeys that she would have known were gone, but at every stop there was some remnant of the Anglo-Saxon past that still remained – Shaftesbury Abbey’s herb garden, for example, or the tiny Anglo-Saxon church above Milton Abbas. Sometimes it was just a carved cross or a statue that dated back to the 11thcentury, but there was always something. 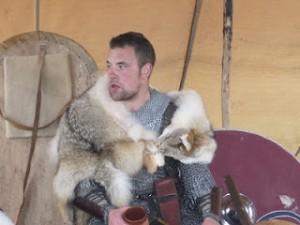 English warrior at Hastings. I LOVE this guy!

There were other site visits to make as well – a trip to Normandy to see the abbeys along the Seine, the medieval town of Rouen, and the ruins of the 10th/11th  century ducal palace in the fishing village of Fecamp. A few years later I was back in England, this time to attend the re-enactment of the Battle of Hastings in the south before driving to the far north where, among other things, my husband and I peered at the scarred skeleton of a nineteen-year-old English warrior at the Jorvik Viking Museum.

And always, as I worked my way through the writing of each draft, there were books to read, journals to consult and details that had to be tracked down – everything from how to brew ale to how to care for the sick. (I was able to find the ale instructions on the internet, and the Anglo-Saxon medical reference, Bald’s Leechbook, I snagged through the Berkeley Library.) By the time I wrote the fifth draft of the book, the title had morphed into Shadow on the Crown. 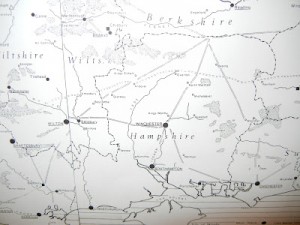 Now, although the book is finished, the research continues because I am working feverishly on the sequel. (All right, not this very minute!) Last week I was studying the Anglo-Saxon attitude towards swaddling babies one day, and reading several chapters of Burial in Later Anglo-Saxon England the next, and guess what. It’s been more fun than I could have possibly imagined when I began.

Shadow on the Crown will be released in the U.S. by Viking in February, 2013, and in the U.K. by HarperCollins in June.

One Response to Suffering from Research Rapture