I am, once more, way behind in my posts. Today I am in Stow on the Wold, about to leave for points north, yet still dredging up my memories of last week in London.

We stayed in a little flat in Marylebone; just perfect for our needs, and just eccentric enough to remind us every moment that we were in England. Case in point: the square commode. 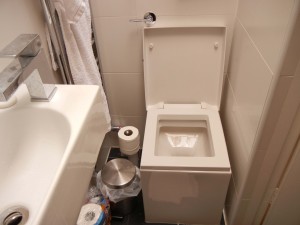 There were other eccentricities: 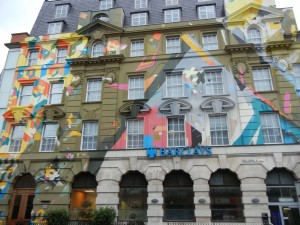 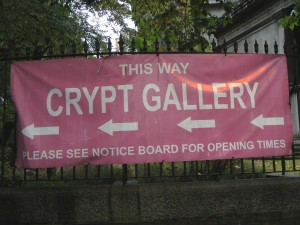 Are you sure you want to be there for the opening? 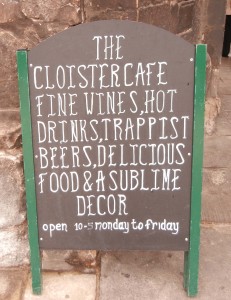 We wandered Regent’s Park on a sunny Saturday. On a rainy Sunday we explored the British Library to see an exhibit on “Writing Britain” and the Treasure Room. The “Writing Britain” exhibit was quite wonderful, exploring the works of authors who wrote about England, from a manuscript of Chaucer’s Canterbury Tales with the author’s portrait in the margin to Austen’s manuscript of Persuasion written on note paper to JK Rowling’s manuscript of one of the Potter Books scrawled on binder paper with doodling scribbled in the borders. I took exception to the fact that no copy of the Anglo-Saxon Chronicle was among the Treasures displayed, however getting to see the newly found Gospel Book of St. Cuthbert (late 7th century and Europe’s oldest intact book) nearly made up for it. No photos. Sorry, they’re not allowed – not even in the bookshop where I was delighted to see Michael Chabon’s Telegraph Ave.for sale. You’ll have to settle for a photo of a book sculpture. 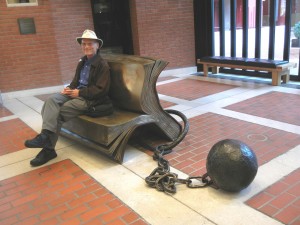 Photo of this book is allowed.

On Monday it rained steadily, although not heavily. Of course I’d planned two of the famous London Walks for that day: Hidden London and London’s Secret Village (Clerkenwell) – both fascinating. I took notes. More details in a later blog. I know. Promises, promises. But I will!

On Tuesday I took myself down to Hammersmith to meet my editors at Harper/Collins who were utterly charming and lovely and, it seems, very much in love with Emma. We had lunch and the conversation ranged far and wide, settling at one point upon English hymns whereupon, at my request that they sing “Jerusalem” for me, they burst into song. I think I must be the only debut author in the world whose editors have sung to her. And quite beautifully, I might add.

We took another London Walk on Wednesday, this time to Hampstead Village, which has been the home of Robert Louise Stevenson, Keats, and Judy Dench that I can recall off the top of my head. There were many more. I’ve always wanted to see the Heath, and I did see just a bit of it — this wild spot north of London. I’d love to spend an entire day there. Next time. 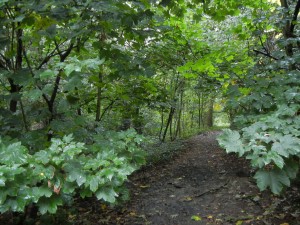 On Thursday we walked over to St. Pancras Old Church — it was an Anglo-Saxon church back in the day, although the walls beneath the Victorian plaster are Norman. There is an altar stone there from the 7th century. I’ve been assured that it’s the oldest church in Britain. The pretty church yard has links to Shelley and Thomas Hardy. (Hardy had a job digging up graves there. One wonders if he was composing ‘Do not go gentle into that good night’ while digging up skeletons to be placed in another part of the graveyard. Ewww.) 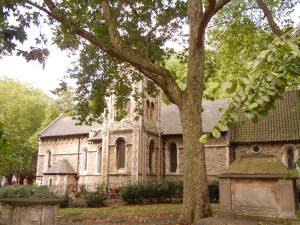 St. Pancras Old Church: most of it Victorian 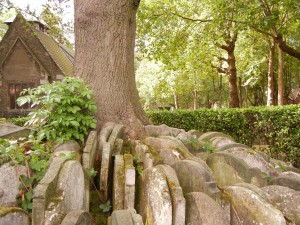 These graves placed here by one Thomas Hardy. You may have heard of him.

One day we took the train to Guildford to visit friends and to explore the ruins of the Norman Castle there. Good photo model, that castle. 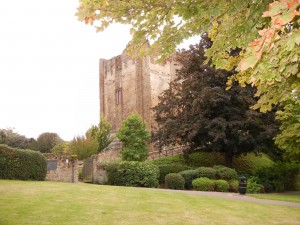 Guildford was the birthplace of Lewis Carroll, so Alice is all over the bookstore there, and I chanced upon a talk being given by children’s author Cressida Cowell who wrote a series and came to fame and fortune with the book, “How to Train Your Dragon” which was made into a film (which I saw. Good film.). Her audience was filled with mums and their children, but I had the feeling that the mums were far more enthralled by the talk than the youngsters.

And then, after several days in London, we stopped in Regent’s Park for a spot of cream tea. 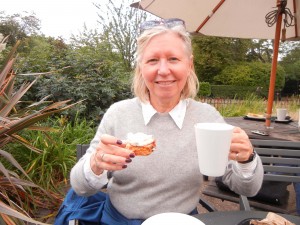 One Response to About London