April Adventures in Wales: A Medieval Dyke, a Carnival & Bookylicious

The bridge at Holt, Wales

In late April 2022 my husband and I made our first post-pandemic trip to Europe. We flew from San Francisco to Palermo, Sicily, making a scheduled stop first in Wales. It’s on the way, right?

Back in January I had wondered if we would ever be able to visit Britain again, given the pandemic and the difficulties of travelling abroad, yet 4 months later, there we were. Will wonders never cease?

We’d stopped in Wales so that I could participate in the annual literary festival, the Wrexham Carnival of Words on April 23. But that was still a few days away, and we’ve never been content to just sit about and twiddle our thumbs while on vacation. Soon we were out and about, nosing our way from our hotel in the village of Rossett to the nearby village of Holt and a stroll along the River Dee.

The next day we explored a little further afield, driving to Erddig, a National Trust Property. And, trust me, driving anywhere in Britain is always an exciting adventure! At Erddig we met up with old friends Paul Jeorrett, David Ebsworth, and David’s wife Ann McCall. Paul Jeorrett, a former librarian at Wrexham Glyndŵr University, is a founding member of the Wrexham Carnival of Words and the host of the not-just-another-book-podcast Bookylicious. David Ebsworth, too, is on the Carnival of Words board, and he is also a historical novelist. I hope that you will visit his WEBSITE and learn more about David and his books. Although we chatted about writing, publishing, and the Carnival, we had come to Erddig for a hike and some history. And our three companions really knew their Welsh history!

Erddig is an estate with a 17th century manor house that actually sits atop a coal seam. In 1733 ownership passed to the Yorke family, who owned it for 5 generations until the death of its last owner, a recluse, Simon Yorke IV. By that time the mansion was in a deplorable state of disrepair, and was actually sinking into the coal seam beneath it. The property was donated to the National Trust with the stipulation that nothing inside the house was to be removed, and that included apparently a vast collection of items gathered over the generations. The building was renovated by the Trust and now offers public tours of its rooms and the numerous items within, from the magnificent to the everyday. 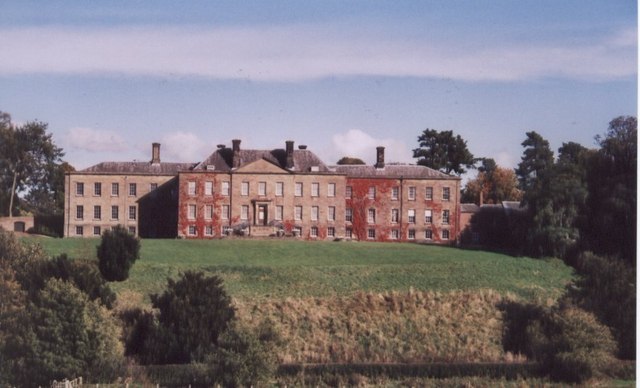 But we were not there to tour the house. Instead we set out for Wat’s Dyke, a  40-mile-long man-made earthen fortification from the 7th or 8th century (archaeologists are not sure) that runs through the property and down the length of much of Wales. This was my first introduction to one of Britain’s dykes, and I was surprised at how high it was—15 feet at Erddig. That’s a lot of early medieval spade-work! A few miles east is Offa’s Dyke, much more famous, and probably newer. We know who built Offa’s Dyke, (that would be King Offa) but not Wat’s Dyke, or how it got its name, or if the Anglo-Saxons built it to guard against the Welsh or vice versa. Along with the exact age of the dyke these are Anglo-Saxon mysteries that are yet to be solved! 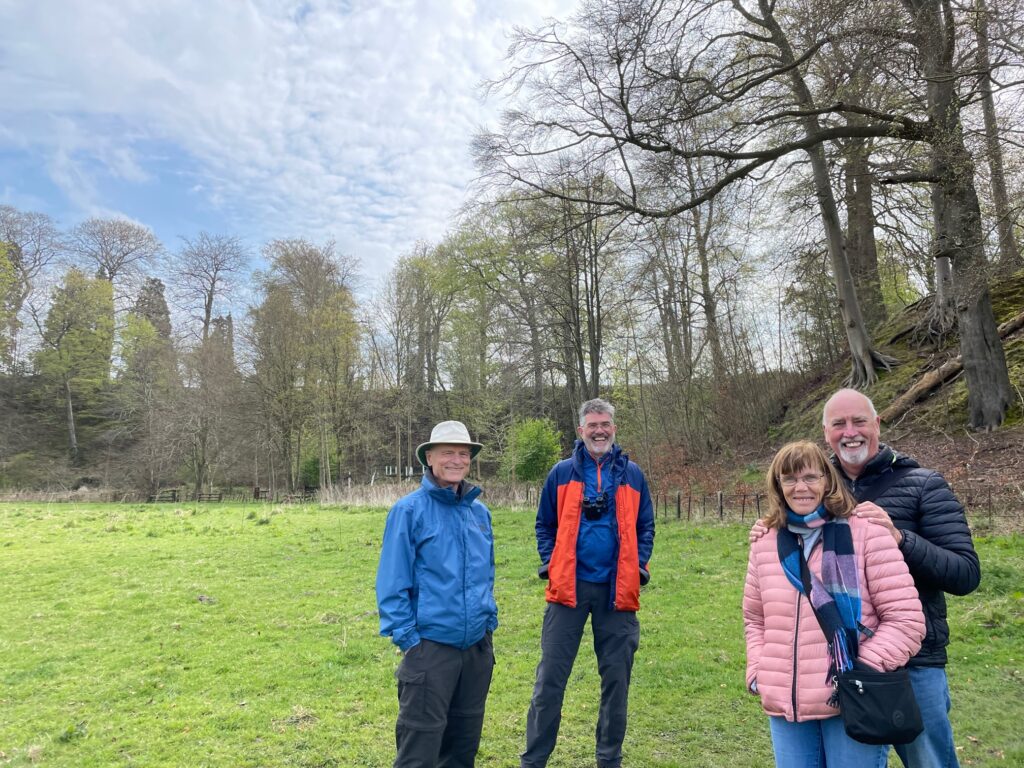 We also explored a late 11th century Norman motte and bailey that stand astride the dyke. No buildings, of course, just the mound for the motte and the flat area below for the bailey, clearly visible to us as we made our way through the woods atop the dyke.

From Erddig we went with David and Ann to Wrexham and St. Giles church where Elihu Yale, founder of Yale University, is buried. David Ebsworth is a walking Elihu Yale encyclopedia, having conducted extensive research about him for the historical trilogy he wrote about Yale’s wife Catherine, who struck David as just as interesting—if not more so—than her husband. The first novel of his trilogy is titled The Doubtful Diaries of Wicked Mistress Yale.

On the morning of April 23 Paul Jeorrett and I met again, this time at Rossett Hall (built, 1750) to record an interview for his podcast Bookylicious. 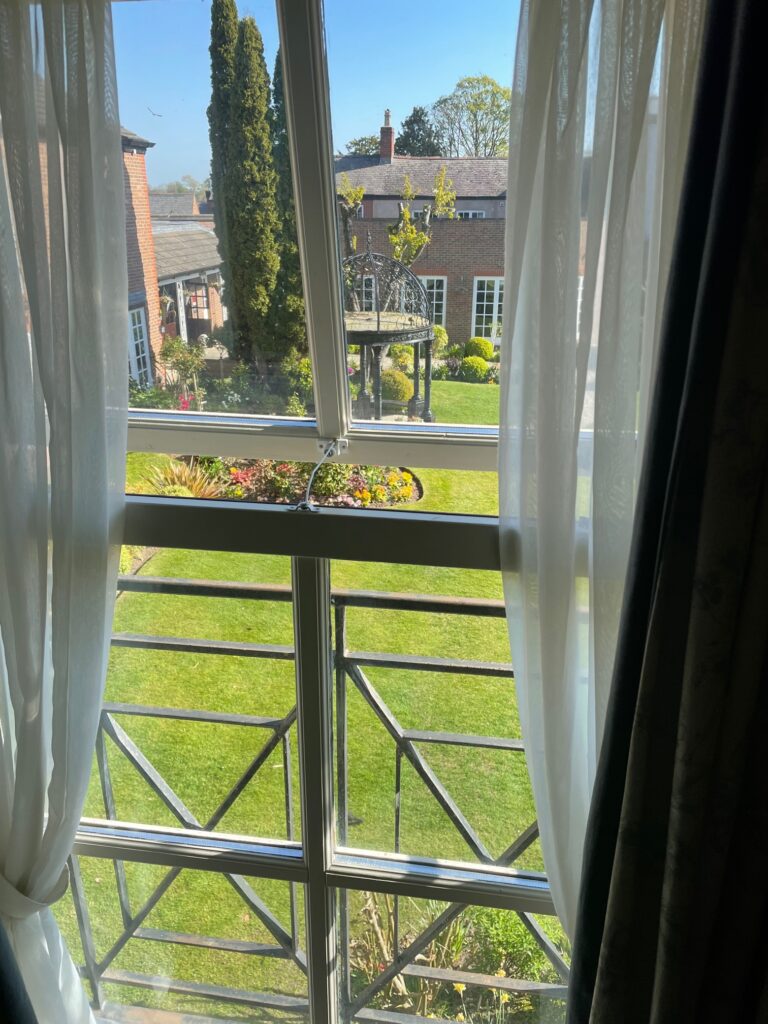 View from our window at Rossett Hall.

We chatted about a great many things: Queen Emma, my novels, “Vikings Valhalla”, the Rollright standing stones, and strong female leads in fiction to name a few. You can listen to our conversation on Bookylicious HERE.

That night my husband and I drove into Wrexham for the Carnival of Words Historical Fiction Night at the Wrexham Library. In the green room we found Paul Jeorrett chatting with historical novelist Barbara Erskine and Dylan Hughes—Dylan being the main organizer of the Festival. It was Dylan who later welcomed the audience – in Welsh! – and introduced Paul, who introduced and interviewed Barbara and me one at a time before we both sat on the dais together to be queried again by Paul before the floor was open to questions from the audience. Barbara is a lovely woman, by the way, with 16 novels published. Her latest is The Dream Weavers, a novel I enjoyed very much. 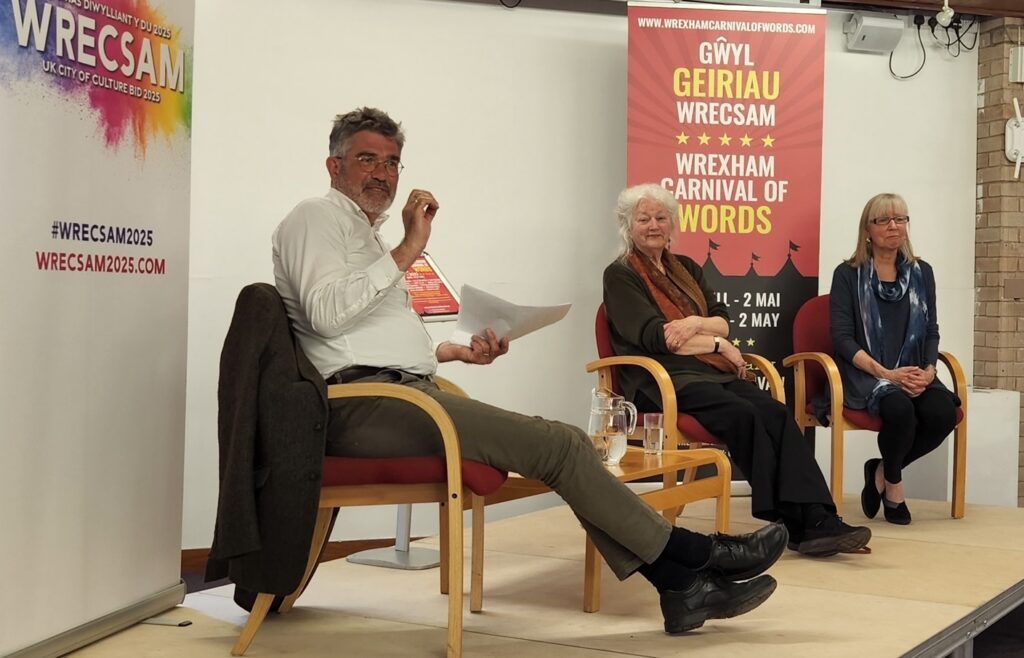 With Paul Jeorrett & Barbara Erskine at the Wrexham Carnival of Words.

We had a very warm and receptive audience of over 40 attendees for our event. During my segment I asked all those who had never before heard of Emma of Normandy to please raise their hands. Nearly 40 hands shot into the air. I was not surprised, and I am happy to report that they know about Emma now! All in all it was a most pleasant evening, and I am eternally grateful to David Ebsworth, Paul Jeorrett, Dylan Hughes, and the board of the Wrexham Carnival of Words for inviting me to take part in their wonderful event.

Our next adventure took place the following morning when we set out for England and Delamere Forest, about 15 miles from the Welsh border. It was a beautiful day and, as its name implies, there was a mere to be found in the middle of the park. The mere, when we reached it, was black, looking more like a mire than a mere – like something out of Lord of the Rings. I couldn’t help thinking of Frodo and Sam.

But it was a lovely day, and there were no midges to bite us and no footpad named Gollum to worry us. Instead the forest park was filled with families and doggies and, to my astonishment, three vikings. I don’t know what else to call them. I was sitting on a bench enjoying the sunshine when they strode past me: three young men, one carrying a sword, one an ax, and the third a seax–or at the very least, a long knife. They were not otherwise dressed in medieval garb, so I have absolutely no idea what they were about. And as I had already walked 6 miles by that time, I did not attempt to follow them. I decided to leave it as another unsolved Anglo-Saxon mystery!

Our next adventure on this European journey would begin in Palermo, but that’s another story.

This entry was posted in Wales. Bookmark the permalink.

3 Responses to April Adventures in Wales: A Medieval Dyke, a Carnival & Bookylicious