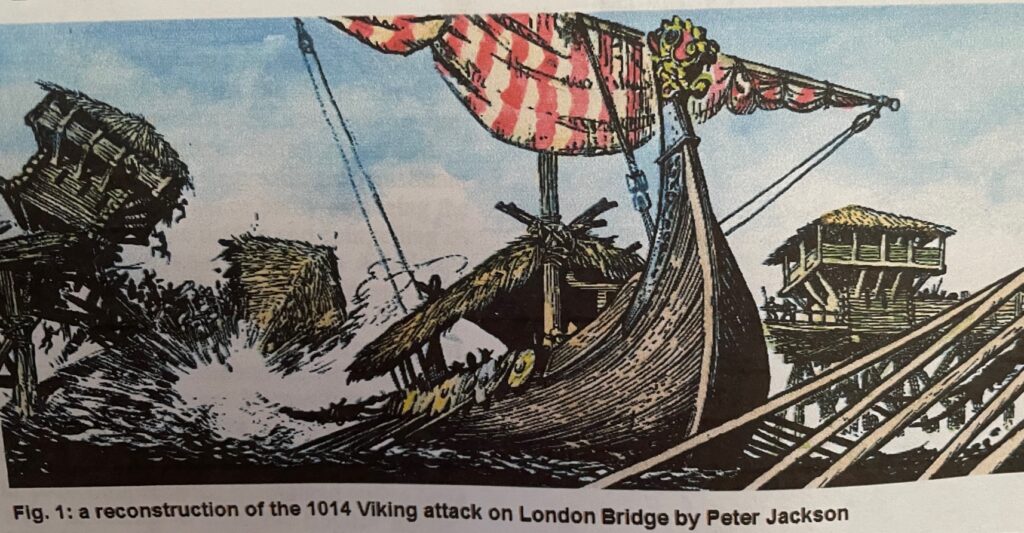 Question One: Did Olaf Haraldsson pull down London Bridge? Yes. But he did it in 1014. In that year the armies of  Swein Forkbeard had taken control of England and London. Æthelred, Emma and their sons had fled to Normandy. But Swein died in February of 1014, and Cnut, who had been wintering with the army in northern Mercia, took command of the army as his father’s heir. In about April Æthelred returned to England from Normandy along with fleets led by Olaf and Thorkell the Tall. To help Æthelred re-capture London, Olaf pulled down the bridge.

Question Two: Did Cnut lay siege to London? Yes. 3 times, in 1016. And Edmund came to the rescue every time. How did Cnut surround the city when he couldn’t get ships past the bridge? The Anglo-Saxon Chronicle explains:

“They sunk a deep ditch on the south side (of the bridge) and dragged their ships to the west side. Afterwards they trenched the city without, so that no man could go in or out, and often fought against it: but the citizens bravely withstood them.”

That’s the background concerning London Bridge. Now, let’s get into this episode. Early on, the Vikings are examining a map of London. It’s beautiful, and pretty accurate, although there would have been large spaces in London where there were fields, for example the area known as Cornhill; and there would have been settlements outside the wall on every side. That’s my only quibble. If you go into the undercroft of All Hallows Church by the Tower you can see a beautiful model of Roman London that looks a lot like Cnut’s map. 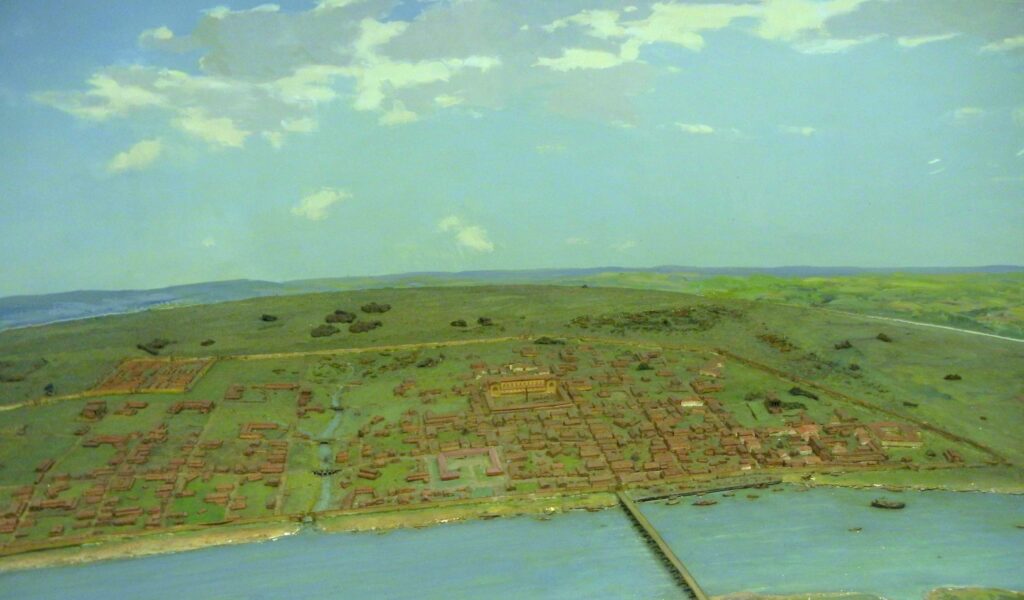 I have a map, too. It shows the various battles between Cnut and Edmund in 1015-16. All of these have been condensed into this one episode—at least I think so. I haven’t watched Episode 5 yet! 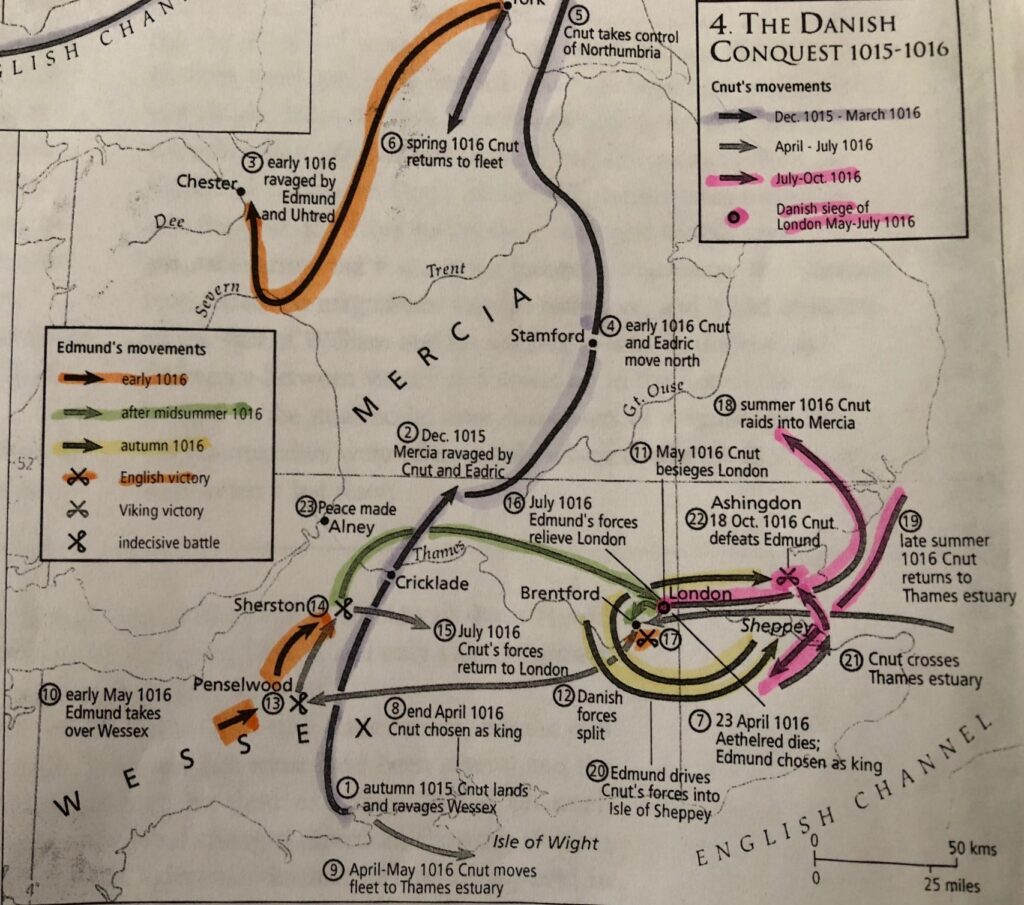 So, a lot has been left out.

Early on, Olaf says that London is the key to taking England, and Harald replies that the key is taking the king. I can see where they’re going with this. It reflects that idea that Edmund is at risk, which is what really concerns Emma and Godwin. And Harald is right. While London was really, really important—it was the financial powerhouse of England even then—the real key to capturing England was getting the nobles to submit—to become dispirited and give up the fight. Yes, if the king was killed or captured, that would do it. Cnut’s father, Swein Forkbeard, captured England, though, by taking its fortified cities one after the other. Sometimes they submitted without a fight because his army was so strong. Finally, all that was left was London, and once Æthelred fled to Normandy, London submitted, too.

Meantime, we’re getting to know Cnut a little better. He’s asking questions, listening to his advisors, thinking. Thinking, as Leif (not Olaf) lays out a plan to pull down the bridge. And a couple of scenes later he has a heart to heart talk with Leif about his plan. He’s trying to fathom Leif; can he be trusted? And something like a bond is formed between them. Cnut was a good leader, and he valued loyalty. I hope we’re going to see that play out in this series.

At the same time, over in London, Edmund is being a petulant child and Eadric Streona is negotiating for power. He’s not going to risk his men while the king stays behind London’s walls. Emma stands firm, telling him to go ahead and leave, but warning him that if Cnut takes Wessex, Mercia will be next. Streona calls her bluff, making to leave, and it’s Edmund who caves, offering to double Mercia’s lands.

Emma is staring at Streona and we don’t know what she’s thinking; but even though she’s the queen and Edmund’s step-mother, Edmund is still the king. He’s been crowned and anointed, and they have to present a unified front. But neither Emma nor Godwin appear to like what Edmund is agreeing to.

Emma is a uniter. Streona is a divider. And I can’t get over that they keep calling him Streona. I really don’t think that anyone would have called him that to his face. It was a derogatory name meaning The Grasper. He had a bad reputation among the nobles of England. There were factions that did not like him because he was Æthelred’s henchman and he grew wealthy and powerful at others’ expense.

I was impressed by the scenes of the Vikings making preparations for the taking of the bridge. It looks just like a scene from the Bayeux Tapestry where the Normans are building ships to conquer England.

Except, here they are making what look like surfboards. Now, today, we don’t really know exactly how that bridge was brought down. We have to look at what they could reasonably do in the 11th century and speculate. This show has set up the idea that there is a swamp that needs crossing, and apparently this is how they plan to do it—move an entire army in the dark. On rafts. Don’t look at the logistics too closely. Just enjoy the ride.

At dawn the trap that Cnut and his leaders have concocted is set into motion while Emma, Edmund and Godwin are watching from the walls. Everybody is playing a waiting game: Cnut parleying as he’s waiting for the tide, Emma urging Edmund to keep Cnut busy while they are waiting for Eadric to attack. Edmund, though, can’t take Cnut’s needling and Emma can’t stop him from leading the city guard out on to the bridge.

I like that Emma–played  by actress Laura Berlin–recognizes the Danish trap, and is directing the English army from atop the city wall. Here is a quote from the Lidsmannaflokkr, a skaldic poem describing Cnut’s capture of London in 1016:

“The chaste widow who lives in stone will look out…[to see] how the Danish leader, eager for victory, valiantly assails the city’s garrison; the sword rings against British mailcoats…Each morning, on the bank of the Thames, the lady sees swords stained with blood; the raven must not go hungry…Every day the shield was stained with blood, lady, where we were out early on our expedition with the king…”

Screenwriter Jeb Stuart has clearly read this poem. He’s brought it to life.

Always remember that Emma’s mother was a Dane and that her father’s grandfather was Rollo. Emma knows how the Vikings fight. They are tricksters.

Final question: Did Eadric Streona run from battle, thus guaranteeing Cnut’s victory? Yes. Here is the Anglo-Saxon Chronicle’s description of the Battle of Assandun, the real showdown between Edmund and Cnut in 1016:

“The king collected for the fifth time all the English nation and went behind the Danes, and overtook them in Essex, on the down called Assandun; where they fiercely came together. Then Ealdorman Eadric, as he often did before, first began the flight, and so betrayed his natural lord and all the people of England.”

My biggest complaint with this episode is the portrayal of King Edmund Ironside. He was not a callow young man, but a fierce warrior and about the same age as Cnut. He won several battles against Cnut, and had the Danes on the run for 18 months; he only lost at Assandun because Eadric Streona fled with his Mercians from the battlefield. 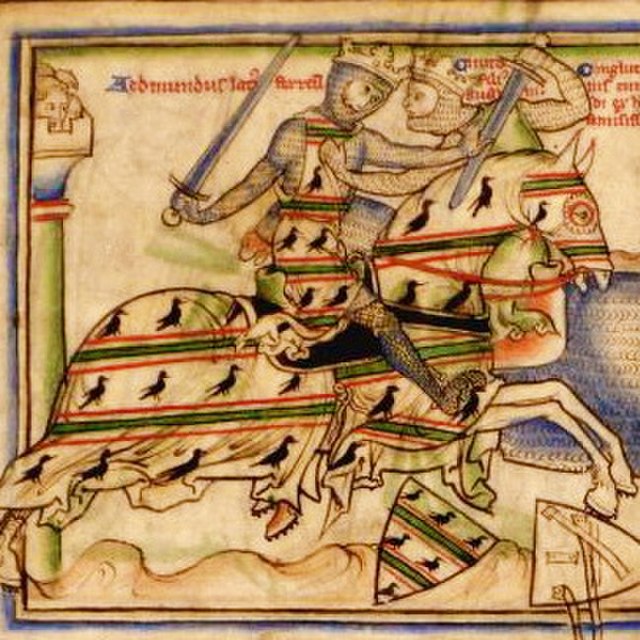