There is a lot to unpack in this second episode of Vikings Valhalla, most of it having to do with what’s happening in England. The thing is, we know a lot about what was happening in England because we have chroniclers writing about it in England, Wales, Germany and Normandy; we also have English charters telling us which nobles are in power and when; and we actually have a will left by King Æthelred’s eldest son when he died in 1014—one of the two elder brothers mentioned by Edmund in this episode. What we don’t have are any written records from Norway or Denmark. Their stories made up the bulk of sagas and eddas that were written down in Iceland in the 13th century.

So when a script writer is putting together a story about Vikings, he can make up a lot, because there is a huge informational gap. When the Vikings interact with the English or the Normans, though, that’s another story. They kept records.

So I won’t be saying much about Leif and his sister because what they did is culled from sagas which are as much story-telling as this series. But I will say this: Leif Eriksson was not part of the Viking fleets when they raided England from 1002-1016. Leif was probably sailing to Vinland (North America) and his sister was probably with him. So, maybe this series will eventually take us to Vinland, I don’t know. We’ll see. The scene where Leif looks up, sees birds in the sky and knows that it means he’s close to land is a good one. The Vikings could even tell what land they were near depending on the kinds of birds they could see. Their sailing skills were exceptional, and this series is showing that through Leif.

About Jarl Haakon: she is an invented character, and I think she is meant to show the wide-ranging Viking world. Also, she mentions Aegir, who is the god of the ocean, and Ran who is the sea goddess who allows those who drown to attend their own funerals if she likes them. So this is all part of that pagan/Christian conflict that the show is exploring. Haakon gives us a somewhat believable back story, and she is very clear-sighted. Whether there was anybody remotely like her in 11th century Scandinavia, I couldn’t say. But I like her.

Now, back to England. The scene opens on a brand new church. It’s St. Frideswide’s and it was in Oxford. And there is a lot that is absolutely correct about this scene. In 1004 Æthelred gave money to St. Frideswide’s church because it had been burned down during the St. Brice’s Day Massacre, which in this episode he refers to as “a most just extermination.” Those words are pulled right from the charter recording this transaction. I’m impressed! And then he says that the Danes themselves set fire to the church. At this point the reaction of the English noble (Godwin) accompanying the king is significant. Did you catch it? He’s looking askance at Æthelred. And the reality is that when the Danes fled from the English into the church for sanctuary, the English barred the door and burned the church with the Danes inside. This segment seems to be revealing Æthelred’s twisted character as he accuses the Danes of burning the church and oh whoops, they killed themselves in the process when he knows perfectly well what really happened. I hope it wasn’t too subtle for viewers who don’t know the real story.

Queen Emma has now made her entrance. She is appropriately steely, smart, and concerned for England. (Yay!) I loved it when a dying Æthelred moaned that he was leaving her with a nightmare (meaning the invading Vikings) and her response was “You married a Norman. We CREATE nightmares.” Oh! Snap! And yes, it’s true that the Londoners for centuries avoided living within London’s Roman walls because they believed the place was haunted; but that changed way back in the reign of Alfred the Great. Still, it’s nice that they give Emma the credit for fortifying London. And it’s true that she was in London when Cnut laid siege in 1016 and was probably responsible for holding the city until it was relieved by King Edmund.

As for Edmund….it’s always interesting to see how different writers portray historical figures. My own impression of the historical Edmund is that he was a pretty tough, confident character. In 1015, with Cnut invading in the south Edmund rebelled against his father by marrying the widow of a powerful Mercian noble that had been murdered by Eadric Streona per Æthelred’s orders. Then Edmund led his men south to confront the invading Danish army, except he ran up against Eadric’s army and was forced to turn back north. Something happened between the two men, but we don’t know what. In this show Edmund is young and unsure of himself. Fair enough. It was pretty cool to see Eadric Streona protesting that it would be foolish of him to lead troops south against the Vikings and Edmund responds with, “I’m going to be king, and I promise that I will remember your doubt and your decision to refuse an order.” Eadric backs down. It’s a shorthand way of revealing the relationship between these two men. Good job.

About the ages of Emma, Edmund, Eadric Streona (whose name means “the grasper” btw), Godwin, and Cnut: We don’t know for sure when any of them were born. Emma may have been as old as 20 in 1002 when she married Æthelred. I’m guessing she was more like 15, so born in 985. Cnut was born about 990, and whenever his birth date, he was definitely younger than Emma. He doesn’t look younger in this show. It’s a quibble because we aren’t really certain what year this is supposed to be! At least he’s younger than Æthelred who had already been king for 25 years when Emma married him.

Eadric Streona was Æthelred’s golden boy, married to one of his daughters, and probably at court a lot of the time. He and Edmund would have known each other well, and probably didn’t like each other. Eadric was THE WORST. He betrayed, King Æthelred, King Edmund and King Canute, always putting his own interests first. This was in a culture where loyalty to your sworn lord was sacred. Eadric failed at that every time.

Godwin tells us about his father, whose name was Wulfnoth (not Godwin senior), and some of what he says is true. In 1009 Eadric’s brother accused Wulfnoth to the king of we-don’t-know-what and Wulfnoth’s lands were confiscated and he had to flee into exile. But Æthelred’s eldest son left Godwin those estates in his will, so from about 1014 on Godwin was on the way up. He became king’s right-hand-man under Cnut, though, not Æthelred, and you probably know that his son would one day be King of England. Briefly.

Now, about Olaf. This is so complicated! Olaf was not in Cnut’s fleet in 1015/16 or whenever this is supposed to be. He was on Æthelred’s side. (!!!) Cnut and Olaf were always enemies because they both wanted to be king of Norway. (Cnut wanted to be king of Denmark, Norway and England. AND HE WAS! But that all came later.) Anyway, Olaf seems to be taking the role of Thorkell the Tall here, who was in Æthelred’s pay from 1012 until the king died in 1016. So for a while, Olaf and Thorkell were both working for Æthelred. After the king died, Thorkel joined up with Cnut and Olaf went to Norway and made trouble there.

And I have to say something about attacking London from the south and the importance of London Bridge. London’s walls protected the city on three sides, but not so much on the south which was okay because on the south was this vast river with a bridge that nobody could get past. The bridge had a fortress on its southern end, in Southwark, so an attacking army would have trouble crossing the Thames that way. And the bridge blocked enemy ships from sailing up the Thames into the heart of England or from making a full on attack on London. The bridge could be fortified by men shooting arrows or throwing fire or other missiles down on any ship trying to get past it. So it wasn’t so much that it was too marshy to attack London from the south; it was that no army could get past or across that bridge until…But we’re not there yet. 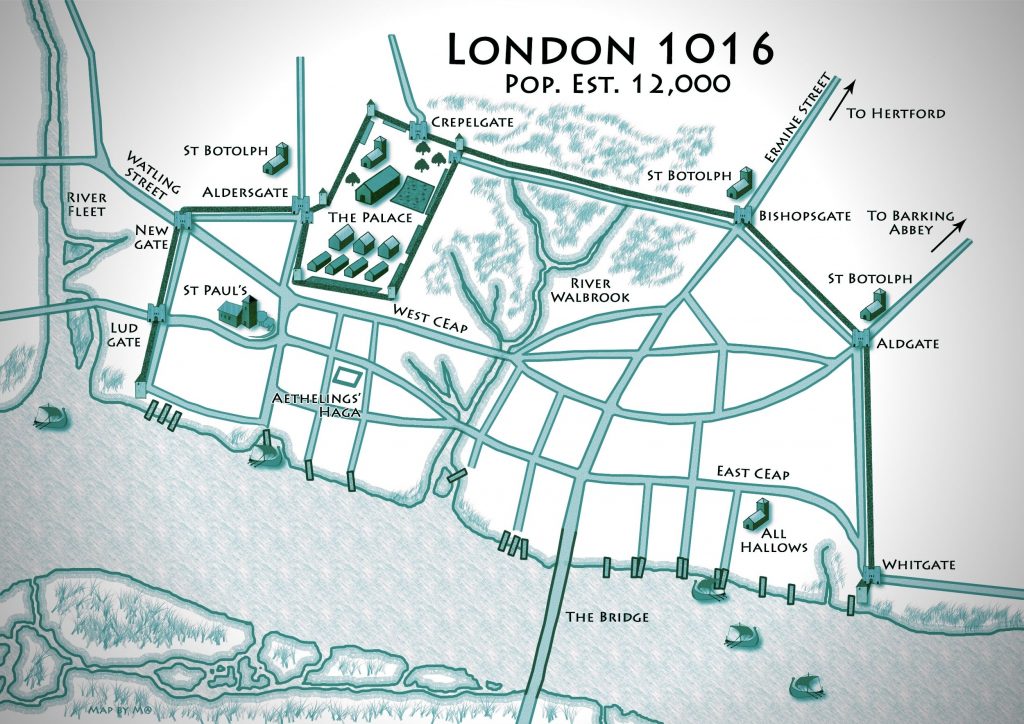