The Death Scene of King Æthelred

Æthelred II, Anglo-Saxon king of England, died on 23 April, 1016. The entry in the Anglo-Saxon Chronicle that notes his passing, probably written within a decade of his death, reads like this:

“He ended his days on St. George’s day; having held his kingdom in much tribulation and difficulty as long as his life continued.”

A century later, historian William of Malmesbury commented at greater length and with far less charity on the king’s life and death:

“His life is said to have been cruel at the outset, pitiable in mid-course, and disgraceful in its ending…He was hounded by the shade of his brother, demanding terribly the price of blood. Who could count how often he summoned his army, how often he ordered ships to be built, how often he called his nobles together from every quarter, and nothing ever came of it?…At the beginning of Lent…he departed this life, a life made for trouble and misery, and lies buried in St. Paul’s London.”

Not exactly a warm eulogy! But what led up to the moment of the king’s death? Who was standing at his bedside? What words, if any, did he speak before he breathed his last?

As a novelist portraying the scene around the king’s deathbed, those were questions that I had to answer. I had created an unsympathetic Æthelred in my novels based on the historical record and on later historians’ speculations, and it was time now to lay the king to rest. Excerpted from my novel The Steel Beneath the Silk, here is that moment, as seen through the eyes of his queen, Emma.

“The royal bedchamber was silent but for the sibilant prayers of Æthelred’s archbishops and the intermittent rasp of the king’s labored breathing. Emma gazed down at the shrunken frame outlined beneath the blankets, and with his every exhalation her own breath caught as she waited for the next rattling gasp.

The stench of illness in the room was not quite masked by the honeyed scent from the branches of candles placed around the bed, but the light they gave off was enough to banish any hint of shadows. She had ordered candles to be burned in this chamber day and night, for she knew better than anyone that Æthelred feared the dark.

Let him have the light, she thought, until the final darkness engulfs him.

He would die in his bed as he had wished, rather than struck down by the hand of a vengeful enemy; but Death itself had been a cruel and merciless foe. Æthelred had been subject to days of torment, his effort to draw air into his failing lungs a wide-eyed, panicked struggle. It had been terrible to watch and no doubt far worse to endure. Now, though, he seemed to have fallen into something that was deeper than sleep. Each gasping breath was shallower than the one before it, and his hollow cheeks and the grey hue of his skin told her that the end was near. She and the others gathered here were witnessing the final, losing battle in Æthelred’s desperate struggle to stay alive.

Emma considered the royal offspring keeping watch with her over the king’s prone body. Edmund, standing at the foot of the bed, was still disheveled from four days of hard riding in response to her urgent summons. His expression was set in a grimace, bearing no sign of sorrow or even compassion as he stared at the waxen face on the pillow. He had not hastened here to reconcile with a dying father, but to claim a dead king’s throne…Once Edmund took the throne all their fates would be in his hands. And as she studied Edmund’s stern expression, the questions that had been spooling through her mind for months surfaced again, and her folded hands tightened with anxiety. Could she persuade him to allow her to remain at court as dowager queen, or would he force her to retire to a convent, the fate of so many widowed queens before her? What would happen to her sons? Might Edmund send them across the Narrow Sea to her brother, and her with them? Richard, she did not doubt, would swiftly arrange a second marriage for her; one that would be to his advantage and without any regard for her wishes.

As she pondered such dismal prospects, the king opened his eyes, and his face convulsed with terror as he gazed at some vision that only he could see. She gently touched his shoulder but, as so often in the past, it did not ease him. How many times had she seen him stare like this in horror at empty space? What did he see that so frightened him, even now, at the end of his days?

His mouth formed voiceless words, and he lifted a clawlike hand as if to push something away—a futile effort. Almost immediately his hand fell to the bed, and his ragged breathing halted. It did not begin again.

Two days later Emma walked, straight-backed and dry-eyed, behind Æthelred’s coffin as it was carried from the palace to the minster of St. Paul’s. Four royal children—Edmund, Edyth, Edward and Alfred—trailed in her footsteps. A vast crowd lined the streets to pay silent homage to the dead king, most of them having known no other ruler. It had been thirty-seven years, Emma reflected, since Æthelred had been crowned following the murder of his half-brother, King Edward. Then, swiftly, she pushed the thought of murdered royal half-brothers from her mind lest the very thought summon a similar disaster.

Inside the great stone church, amid billows of fragrant incense and the mournful chanting of the office of the dead, Æthelred’s soul was committed to God. Emma, relieved that the long death watch was over, could not grieve for the husband and king who had inspired neither her love nor her respect. He had suffered from a darkness of soul that seemed to consume him, and she could only pray that in death he had found release from the shadows that had both tormented and goaded him.” From The Steel Beneath the Silk, Chapter 36 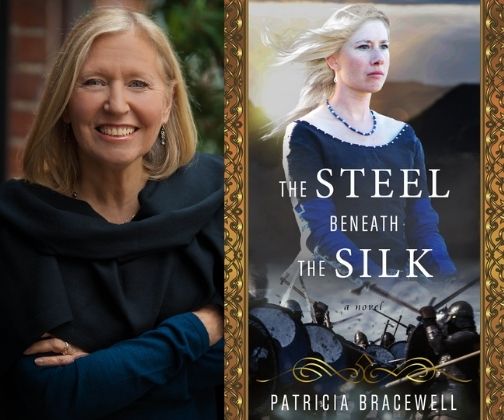 Sources:
The Anglo-Saxon Chronicle. www.britannia.com
The History of the English Kings by William of Malmesbury, edited and translated by R.A.B. Mynors, R.M. Thomson and M. Winterbottom, Volume 1 (1998), Oxford University Press