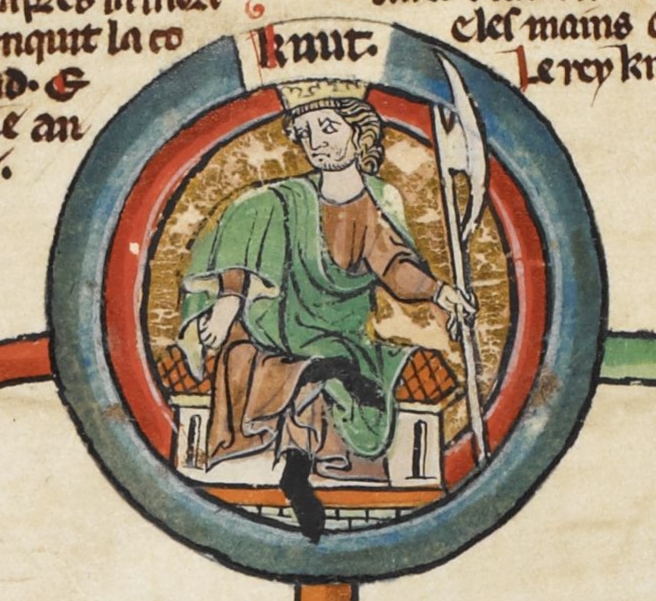 Cnut the Great, England’s Viking king, died on Wednesday, 12 November, 1035. Cnut’s birth date was not recorded, but it was likely some time in the 990’s, so he was probably in his early to mid-forties when he died at Shaftesbury Abbey, a foundation favored by the king.

Shaftesbury was the burial place of a previous, Anglo-Saxon king of England, Edward the Martyr, and it is tempting to think that Cnut might have been at the abbey because he was ill and he wanted to pray for the intercession of the sainted king (who by all accounts was no saint, but that’s another story.) Shaftesbury was an abbey of nuns, so it’s also possible that he was there to be tended by the sisters in hopes of recovering from whatever was ailing him. According to Cnut’s biographer Timothy Bolton, Cnut would have been surrounded by members of his court and his huscarles. I imagine that his queen, Emma, was with him as well. We cannot be certain of any of that, but kings of that period rarely went anywhere alone.

Although he was a viking, Cnut was a Christian. His mother, a Polish princess, would certainly have insisted that her children be baptized; Cnut’s baptismal name was Lambert. During his reign as England’s king he made a pilgrimage to Rome where he not only took part in the coronation ceremony of the Holy Roman Emperor but made visits to every sanctuary he could find in the city. It would have kept him busy, to be sure, but he also spent a good deal of his time there negotiating diplomatic and trade agreements for the benefit of the English.

In England, the make-up of Cnut’s court would have been Anglo-Scandinavian with, presumably, elite visitors from all parts of mainland Europe in attendance at times. Cnut “did his best to correct all the misdoings of himself and his predecessors, and wiped away the stain of earlier injustice, perhaps before God and certainly in the eyes of men. At Winchester especially he exhibited the munificence of his generosity, where his offering were such that strangers are alarmed by the masses of precious metal and their eyes dazzled as they look at the flashing gems.” (William of Malmesbury)

Cnut was buried in the minster at Winchester, although his remains are currently undergoing examination along with those of Queen Emma and several other royals whose bones are all mixed together in the same mortuary chest.

The examiners at the University of Bristol hope to identify and separate the remains, and determine the physical characteristics of each through DNA testing. When the findings are complete, we may know a great deal more about the appearance, and perhaps even the cause of death, of England’s Viking king.

This entry was posted in History, UK, Vikings and tagged Cnut. Bookmark the permalink.