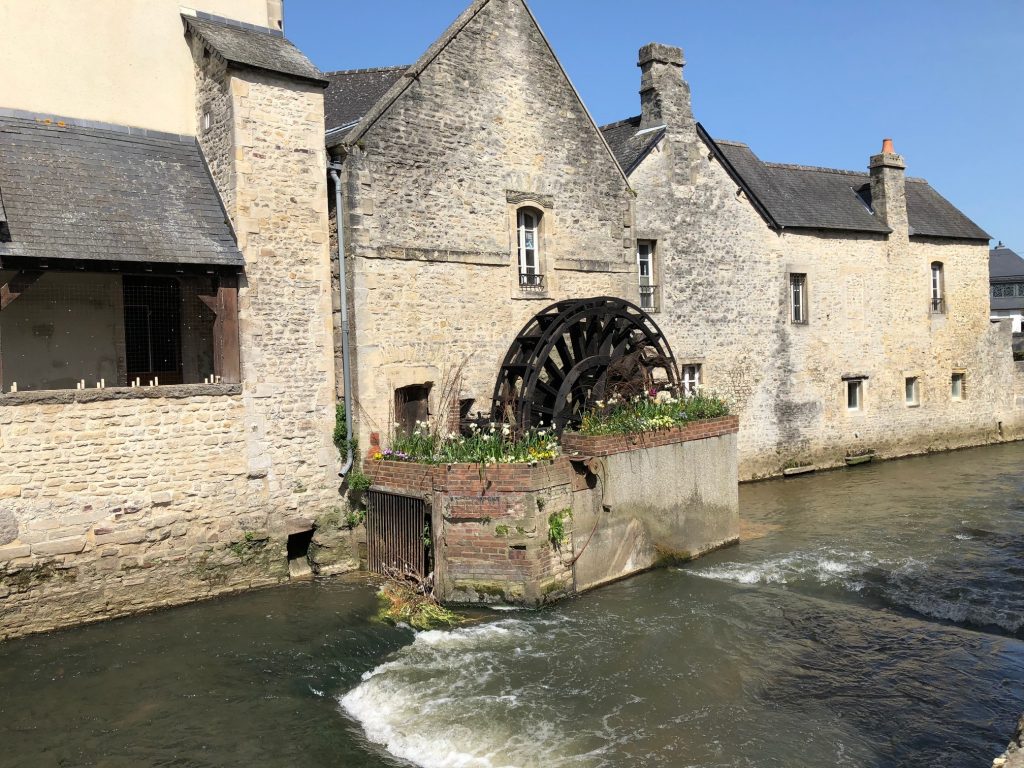 The charming town of Bayeux near the coast of Normandy is perhaps best known for its remarkable Tapestry, a very long length of embroidered linen that portrays events surrounding the Battle of Hastings in 1066.

A few years ago I wrote about the Tapestry and its history on this blog, (you can review that here, if you like), but I had not yet visited Bayeux myself. I had been to Normandy – to Rouen, Fecamp, the Abbeys of Jumieges and Wandrille, to Caen and even the island and abbey of Mont Saint-Michele, but I had missed Bayeux in my several trips to Normandy over the years. Last month, though, I spent a few days there, absorbing the Tapestry and its story with some help from the audio tour that, interestingly, tells the story from the French point of view. Which, as you may guess, differs in certain crucial details, from the English version of what happened. 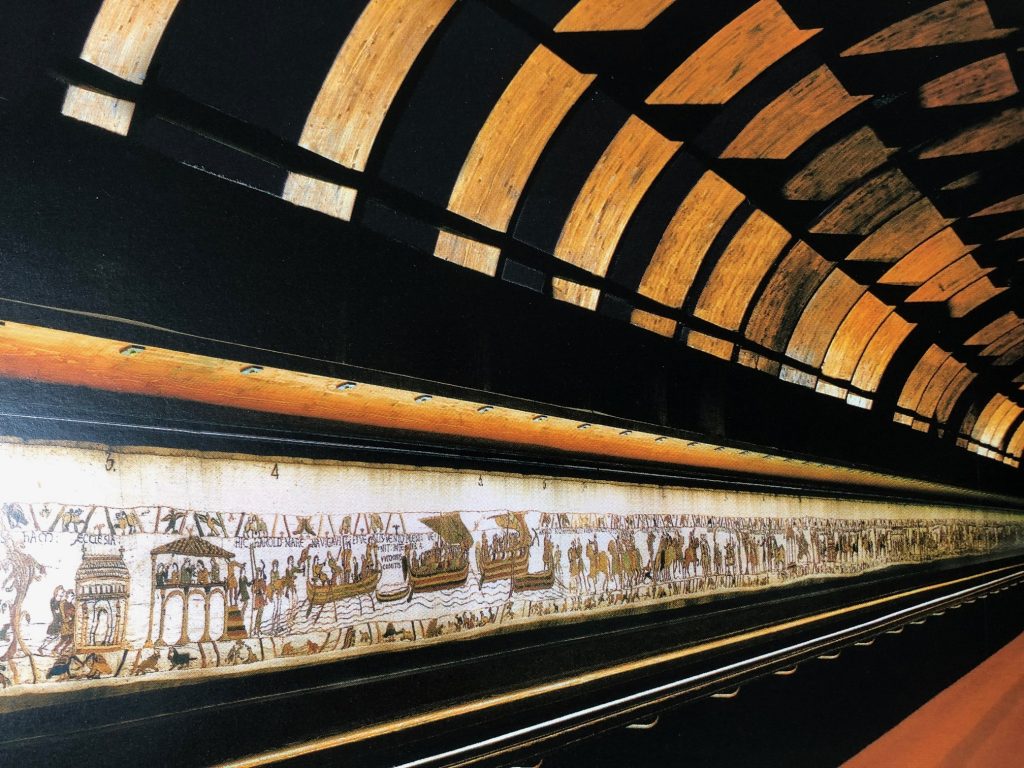 But today’s post is not about the Tapestry. No, it is about what I discovered unexpectedly as I wandered about the city of Bayeux: a direct link between Bayeux and Emma of Normandy, queen of England.

There is a park in Bayeux—Place Charles de Gaulle—named so because on June 14, 1944, shortly after the Allied landings of D-Day, the General returned to France, to Bayeux, after 4 years of exile during the Nazi occupation; and on that day he gave a speech in that park. It was a momentous event, and presaged the end of WWII. (And, by the way, the return of the Tapestry to Bayeux after the Nazis had spirited it away. See earlier post for that story.) 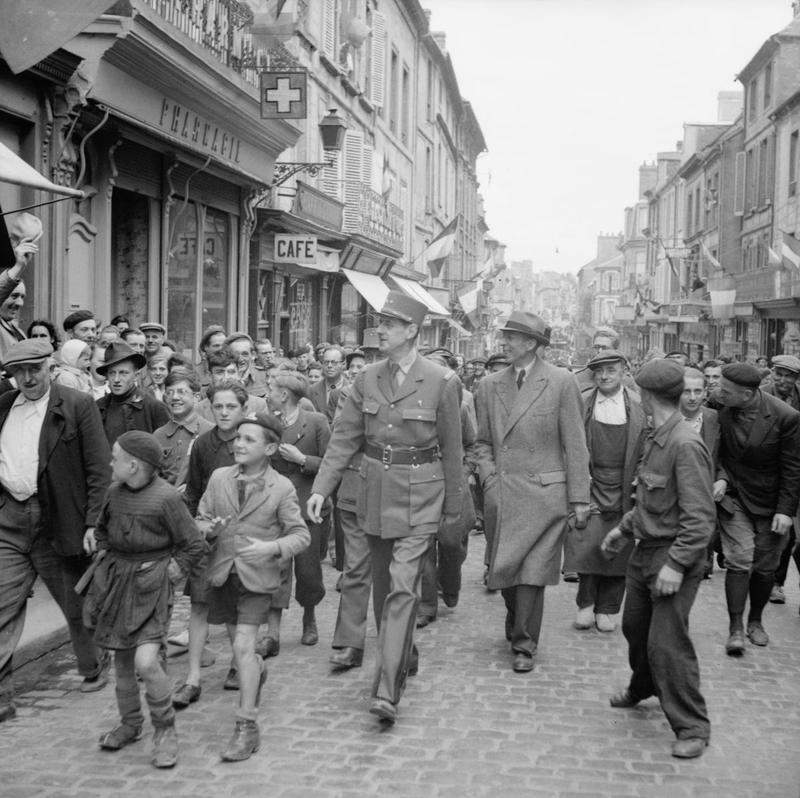 But long before that, in about 960, Richard I—Emma’s father and the first Duke of Normandy—built a castle on what is now Place Charles de Gaulle.  Bayeux Castle was still standing until the latter part of the 18th century, and it’s entirely possible that way back in the late 10th century, Emma may have visited the castle with her family. Like all royals of that time, Richard’s court was peripatetic. It moved from estate to estate, or fortification to fortification, dispensing ducal justice and living off of local food rents. And hunting. And feasting. And probably sorting whatever problems had come up since the duke’s last visit.

Bayeux Castle had a fortified gate to the west that allowed direct access from outside the city. It had another gate to the east, that overlooked the city and was equipped with a drawbridge over the defensive moat that surrounded it. It had a lodge for the castle commander, a chapel, barracks for the garrison, and a manor house. It looks pretty impressive in the drawing below, but my guess is that the first fortification, built by Richard, was much, much simpler. Moat, drawbridge, manor and all those towers you can see were likely added centuries later. Still, it was a ducal estate, and Emma might well have spent time there as a child.

Today, smack in the center of the park stands a fountain that was erected in the 19th century by a mayor of Bayeux to honor the Dukes of Normandy. Atop the fountain is a statue representing Poppa, the woman believed to be the ancestress of all the Norman dukes and, by the way, the kings of England thanks to William the Conqueror and the events depicted on the Tapestry. Here is Poppa: 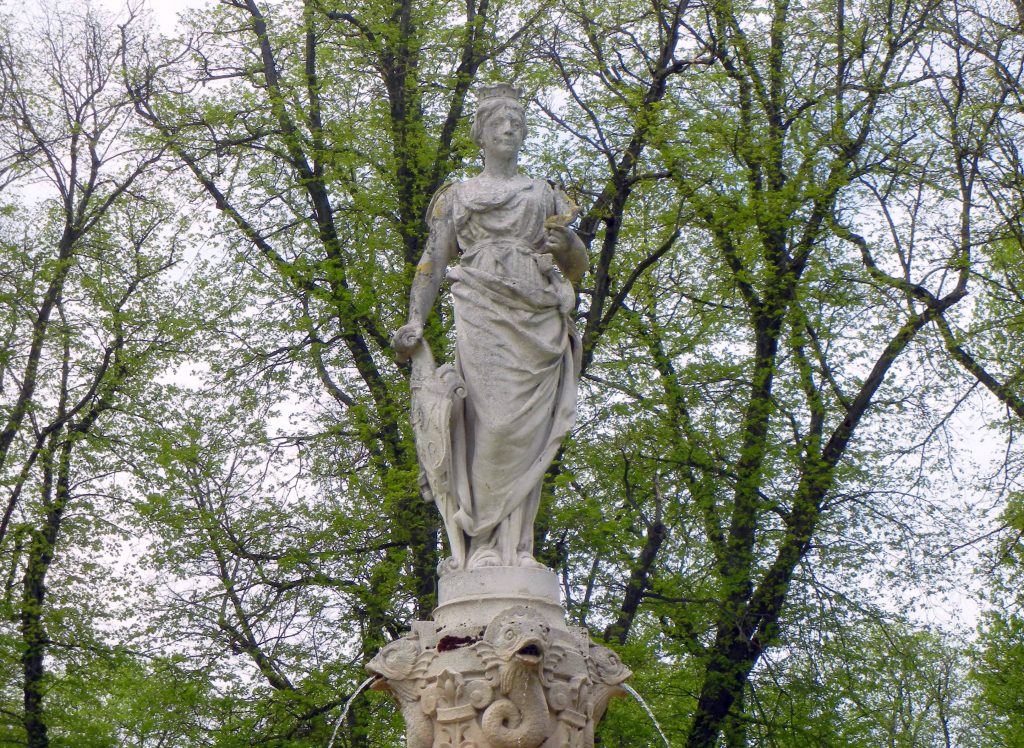 Statue of Poppa in Bayeux

So. Who, exactly, was Poppa and why did she land on that fountain honoring the Norman dukes?

According to historian David Crouch in his book The Normans, and he is drawing  from the 10th century Norman historian Dudo of San Quentin, Poppa was the beautiful daughter of a Frankish count, Berenger II of Neustria. She fell into the hands of the viking, Rollo when he sacked the city of Bayeux—and that sounds like it might make a good novel!

Dudo goes on to report that Poppa became Rollo’s concubine. It’s just as likely that Poppa had no say in the matter whatever, and Rollo would later set Poppa aside to marry Gisela, the daughter of King Charles the Simple. Marriage in the 10th century was all about political alliances, not personal preference. Gisela, though, was childless, and she fell into disgrace for insulting her husband and for entertaining Frankish men on the sly. Apparently she preferred Franks to vikings, or maybe Rollo hadn’t put Poppa as far aside as Dudo would have us believe. Because when Gisela died, Rollo took up with Poppa again, and it was Poppa who was the mother of Rollo’s heir William Longsword, who was in turn the father of Richard I, who was in turn the father of Emma. So that makes Emma the great-granddaughter of Rollo and Poppa.

Note: The tv show VIKINGS would have you believe that Gisela was the mum of Rollo’s children. Not so. It was the beautiful Poppa, Berenger’s daughter–at least, according to Dudo. And he was there.

Bordering the park and within sight of the fountain is the Hotel Particulier Poppa. Hotel particulier is the French name for luxurious city mansions. This one was built in the 19th century and now it is an actual hotel—something I did not realize until after I left Bayeux. It seems that I might just have to return there one day—to visit the Tapestry again and to stay in the lovely hotel named after Emma’s great-grandmother.

10 Responses to Emma of Normandy & Bayeux