“The book shop is just here.” The clerk at the Grande Hotel do Porto penciled ‘LELLO’ on the city map in front of me.

We had arrived at our hotel too early for check-in, and I had asked him to suggest something that we might do in the meantime. Nothing too adventurous, mind you. The little town where we’d spent the past week, Malveira da Serra, was two hundred miles behind us, and just getting to this hotel in Porto today had been something of an adventure already. We had obediently followed our Garmin’s instructions to turn into Rua de Santa Catarina, only to find ourselves immediately surrounded by pedestrians milling about in the street, on the sidewalks, and all around the car. I was convinced that we had just turned on to a pedestrian mall, but the delivery truck on our rear bumper was insisting that we move forward and there was no going back, so my husband drove slowly and carefully ahead. Half a block later the Garmin announced that we’d reached our destination, and now the very friendly hotel desk clerk was suggesting I go to a bookstore.

He did not know that I’m a writer, did not know that bookstores are like comfort food to me, and so I was puzzled. I looked at him, my expression a bit doubtful. Surely all the books would be in Portuguese. Even to me, it seemed that there would be little there of interest.

And so we left the car in the hotel’s tiny garage where the attendant spent his entire day shuffling cars about, poor man, and set out on foot for the bookstore – by way of the market, Mercado do Bolhāo. I wanted a snack.

It was late in the afternoon, and most of the market stalls had already closed. 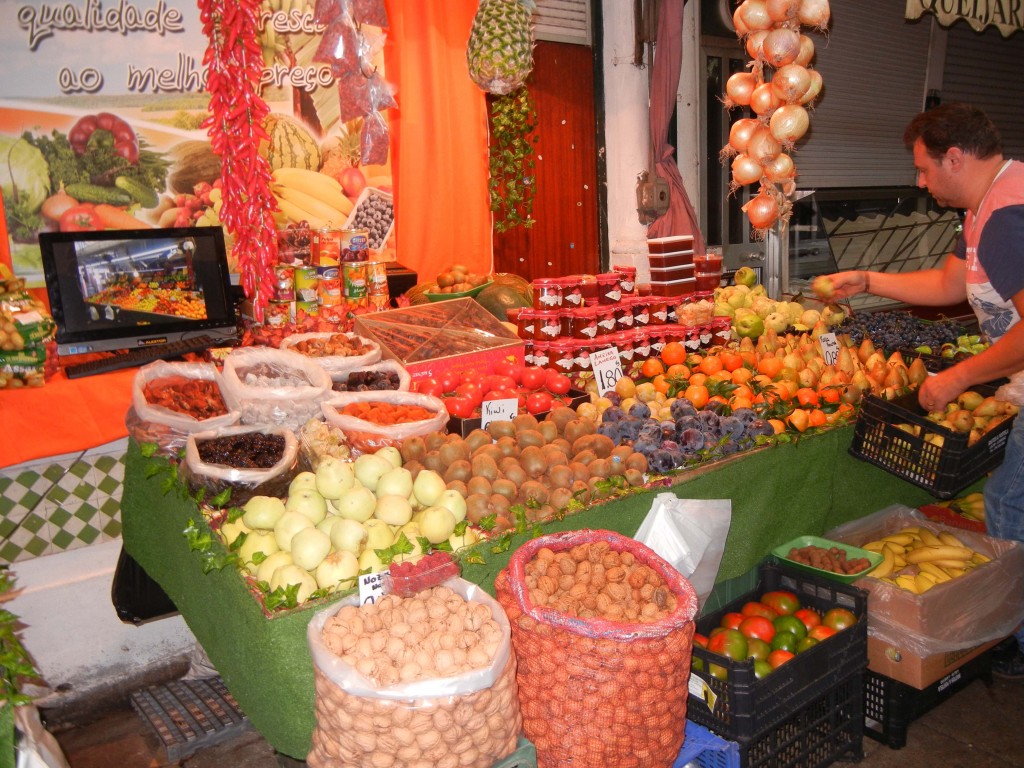 Still, I found some fruit, and then we set off for the bookstore, the map held in front of me like a talisman. Portuguese street names were not completely unfamiliar to me by now. Nevertheless, getting my mouth around them was still a challenge.

I’m certain that my pronunciation was horrible, but as long as it was only my husband hearing me, I didn’t worry. We were looking for Rua dos Clérigos which would take us to Rua Carmelitas.

Definitely a religious element there, I thought, and sure enough, when we turned on to Rua Carmelitas there was a large church at the other end of the street. Igrejas do Carmo e das Carmelitas.

I scanned the storefronts as we passed, and even so I nearly missed it. Its exterior at street level was unpretentious, what Americans would refer to as ‘a hole in the wall.’ Somewhat non-plussed, I pushed open the door. And this is what met my astonished eyes. 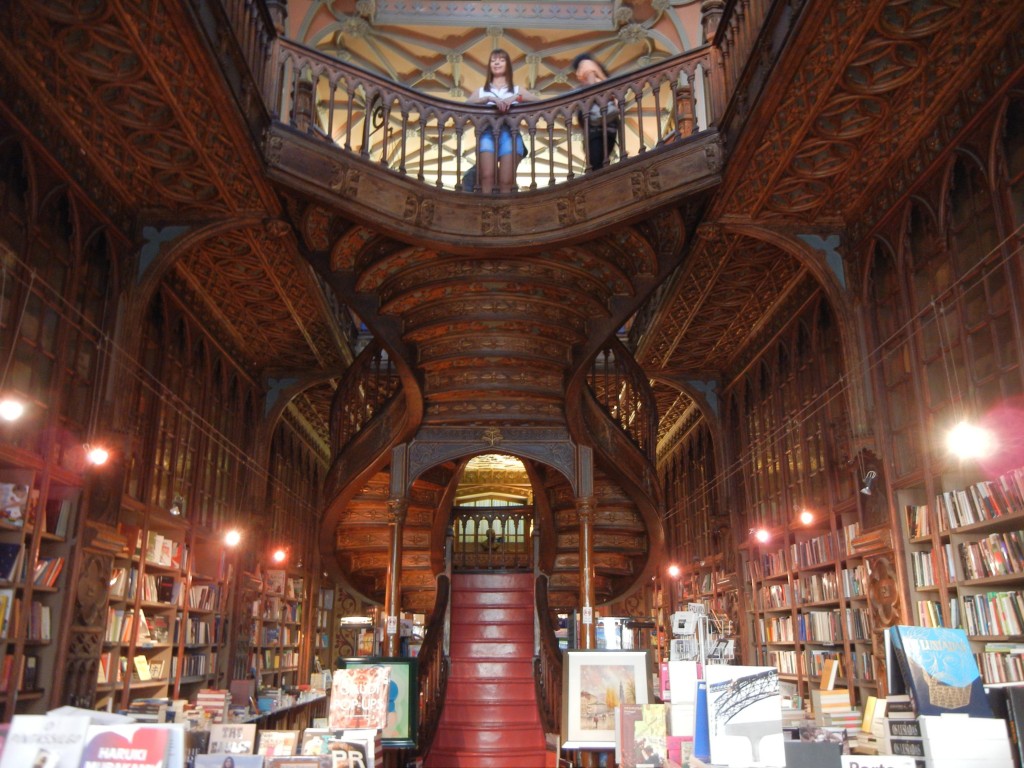 It looked like a little palace for books.
It looked like it belonged in Harry Potter’s Diagon Alley.
It looked like something out of one of Disney’s animated films. I half expected the books to start dancing and singing ‘Be Our Guest’.

It was lovely, and I wanted it – or at the very least, I wanted a dozen photos of it. Forget the books. I wanted to take this entire room back home with me.

But right there in plain view was a sign in several languages:

NO PHOTOS.
PHOTOS ARE FORBIDDEN EXCEPT BETWEEN THE HOURS OF 9 AND 10 A.M.

Right, I thought. Today is Monday, and we’re here in Porto until Thursday. I’ll come back tomorrow morning and take my photos.

Livraria Lello e Irmão has been in existence since 1906, the building designed by Xavier Esteves. It’s exterior – and you must look at it from a distance to perceive it – is neo-gothic. Its marvelous interior is art nouveau, with a stained glass skylight, a breathtaking stairway, and arching, glass-enclosed bookshelves. It is surely one of the most beautiful books stores in the world. We spent some time just wandering about, gawking, admiring its bones if not its wares. 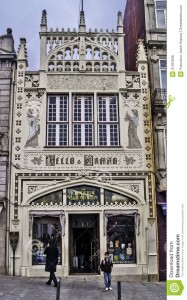 And bright and early the next morningwe were back at the front door of Livraria Lello. Only to find this:

Imagine my disappointment. No photographs for me! But we would not leave Porto until Thursday, and on Thursday, I promised myself, we would return.

And so we did. We arrived at precisely 9:15 a.m. on Thursday, only to find the book shop door locked against us. There were people inside. They were taking photographs. I wanted to join them. Surely one did not have to be there precisely at 9:00 a.m. to get in! I knocked on the glass door. I was ignored. I knocked again, and a charming young oriental woman on the inside stopped snapping photos just long enough to indicate that she could not open the door. Sorry, she mouthed.

By this time a crowd had started to form behind me, and I finally realized that perhaps visitors were allowed entry to the inner sanctum only at intervals. Sure enough, a few minutes later I saw a woman who was built like a small tank and looked as though she brooked no nonsense, call out “Time!” loud enough that I could hear her voice through the door. The visitors on the inside were ushered out, and when the bookshop had cleared, the next batch was allowed in and the door locked behind us.

We had, I decided, roughly ten minutes to capture this remarkable place on film. My husband and I snapped photos, trying for the best angles and the best light. You see here the results. 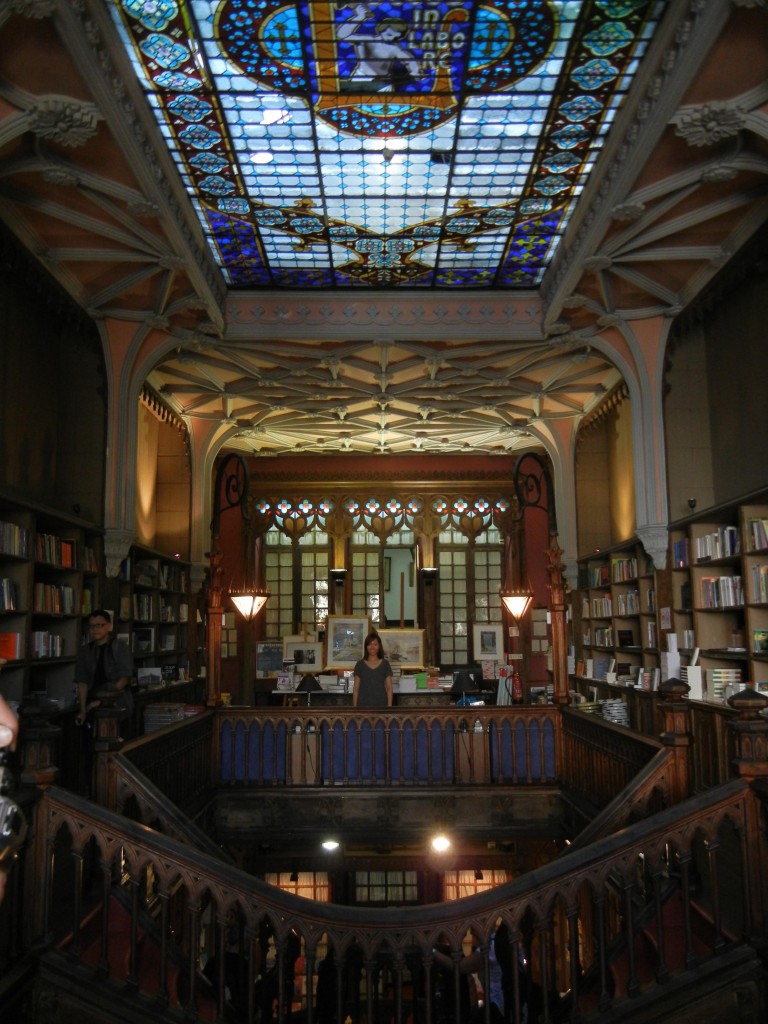 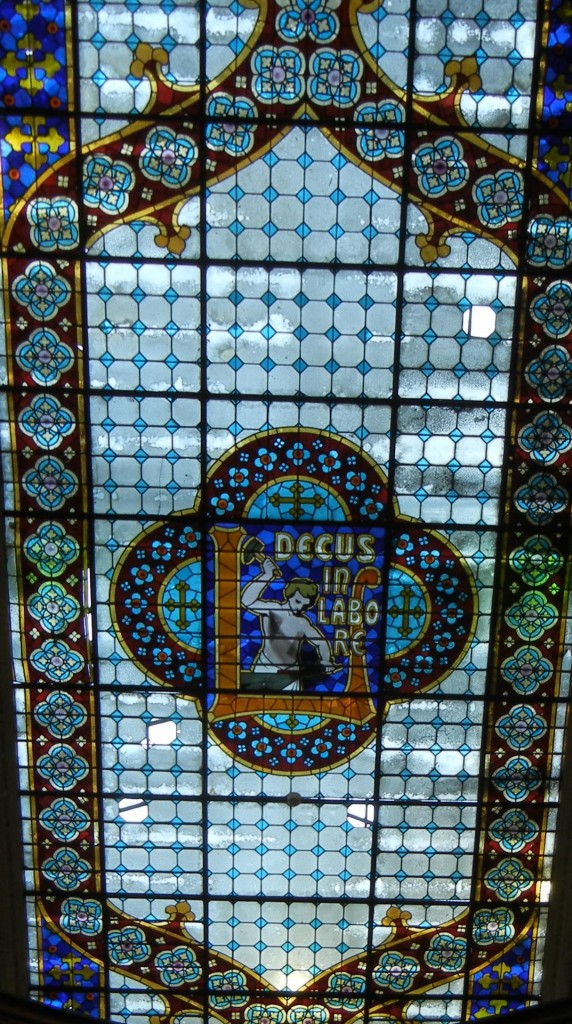 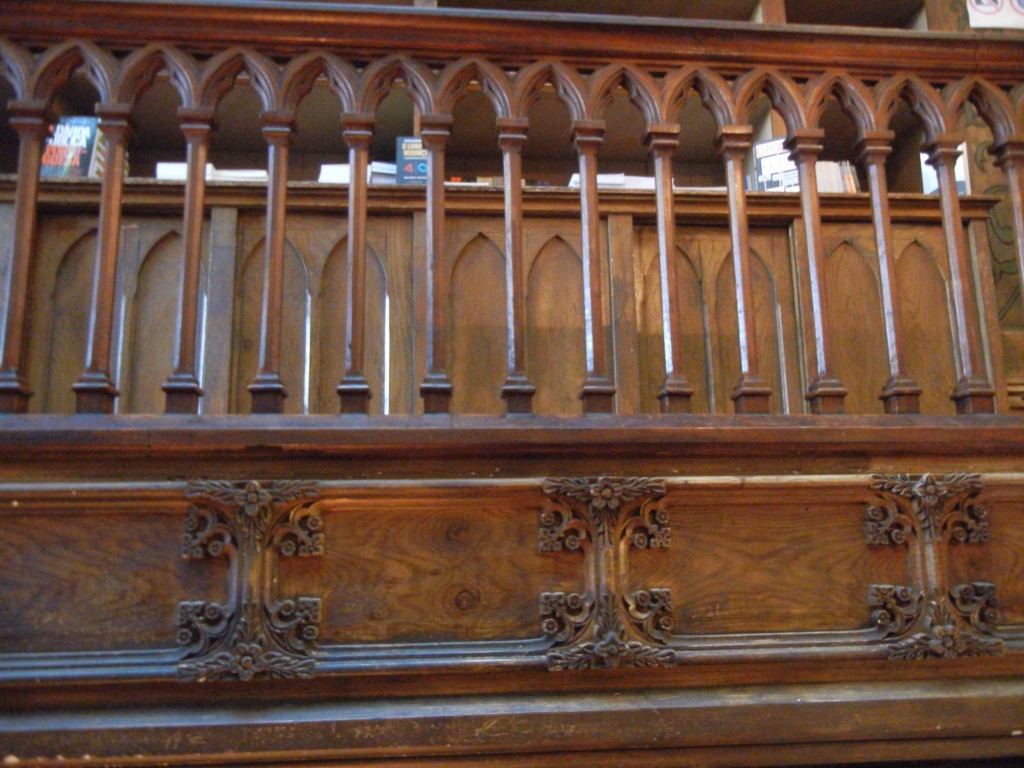 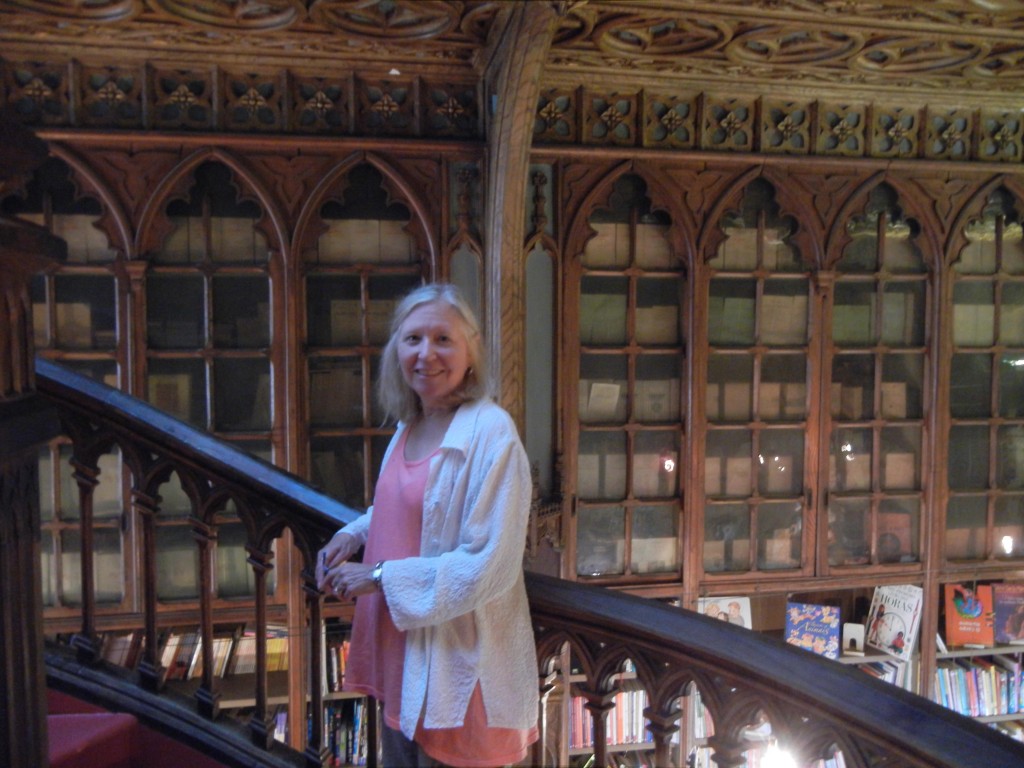 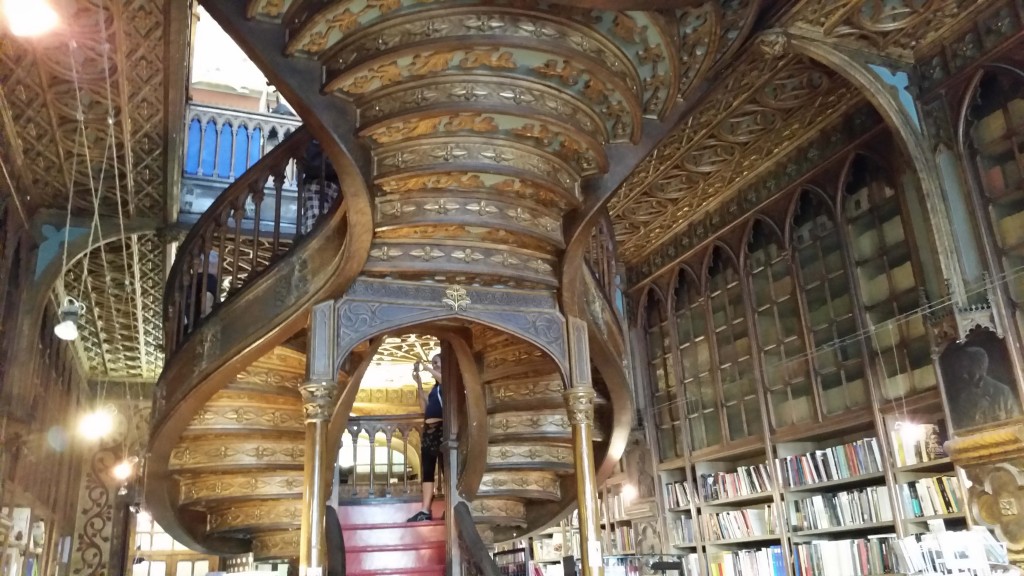 If you’re ever in Porto, Portugal, be sure to stop in at Livraria Lello e Irmão because you will be charmed. But if you want to take photos, make sure to get there before 10:00 a.m.

2 Responses to The Splendid Bookshop