All Hallows, Physic and the HNS Conference

One of the things you’re reminded of on the London Walks is how much of London was destroyed in the blitz. A great deal of it was simply built anew, but some places were painstakingly restored just as they had been before the bombings. One of these is All Hallows Church by the Tower, and one of the bits of the church that was still standing at war’s end was an Anglo-Saxon archway inside the church. 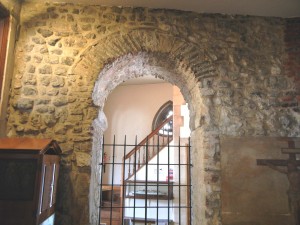 Anglo-Saxon arch at All Hallows

So, eager to see whatever I could of Anglo-Saxon London, I headed to All Hallows on Friday. To make the top of the arch the Anglo-Saxons used Roman bricks. Lots of those lying about – the church undercroft still has Roman pavement that is 2000 years old. 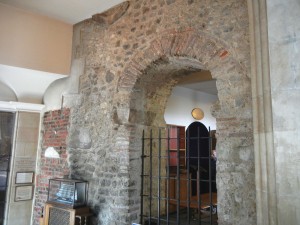 The A-S arch, from the other side.

My next stop was to a place that, although not specifically Anglo-Saxon, would be of interest to any author writing pre-1900: The Chelsea Physic Garden. I have books devoted to herbs and their medicinal properties, and the pictures are quite helpful, but actually seeing the plants adds another dimension to the flat photos or drawings in a book. Size and color, for example, are much easier to gauge in person. I was particularly interested in the poisonous plants, so no touching. The Atropa Belladonna was actually in a cage. Apparently a few years back, a couple of Spanish women each picked and swallowed one of the berries, thinking it would make them beautiful. They were immediately sent to hospital. 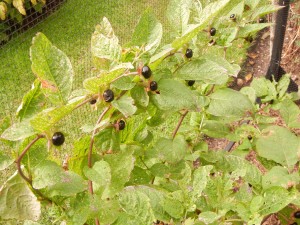 My own garden visit was followed by a trip to the University of Westminster and a weekend of HNS Conference activities. It was truly a celebration of historical fiction and of the authors who write it. For me it was an opportunity to make new friends, to re-connect with old ones, and to turn to some of our finest writers for inspiration and eloquence. I was particularly struck by a comment made by Margaret George: “We are the time machines who take our readers into the past.”

The highlights: Jenny Barden, who seemed to be everywhere at once; 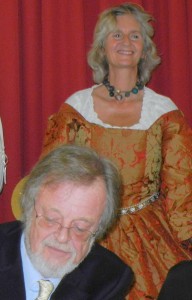 Richard Lee, who was never far behind Jenny; talks by Philippa Gregory, Elizabeth Chadwick and Lindsey Davis – all wonderful; Bernard Cornwell, who could give up writing and make a good living as an after dinner conference speaker if he wanted; everyone who came in costume, especially the Militia Re-enactors who happily posed for photos over and over, the darlings; 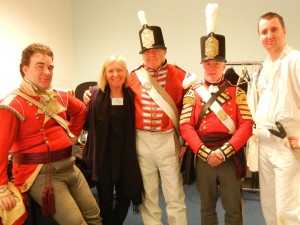 and the fabulous trio of Bagwell, Cornwell and Gabaldon whose ad libs during their Saturday Night Nell Gwynn Sex Scene reading nearly brought the house down. 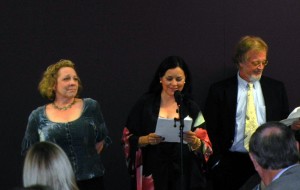 As for the workshops and sessions, there were so many terrific ones that I am hoping at least some of them will be repeated next June in Florida.

And now, with regret, I’ve bid farewell to London for this trip. On to Stow on the Wold! 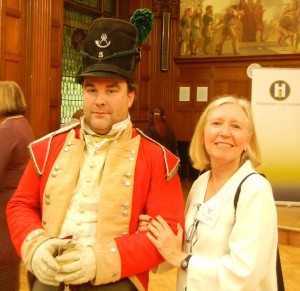