“Game of Thrones” & the Anglo-Saxons

A quick internet search for ‘Game of Thrones’ and ‘History’ will offer theories about what historical events and figures inspired author George R.R.Martin, some of them suggested by Martin himself. For example, the resemblance of the houses of Stark and Lannister to the high medieval houses of York and Lancaster; or the elements of the Red Wedding inspired by the Black Dinner of 1440 Scotland. Search a little further and you’ll find Brienne of Tarth compared to Joan of Arc, (both woman warriors); Tyrion Lannister to Richard III (both successful despite physical handicaps);  even Cersei Lannister as perhaps resembling Russia’s Catherine the Great (women rulers who rid themselves of burdensome husbands and swiftly snatched the reins of power.)

I’d like to point out some elements from Anglo-Saxon England that may have seeped into Martin’s mind as he wove his tale.

ONE:  Let me begin with this final season’s penultimate episode, “The Bells”, when Daenerys Targaryan gave new meaning to the phrase “scorched earth policy” with the addition of a dragon. I am presuming, of course, that Martin had some say in what happened in this episode, and there is certainly a nod to Tolkien’s Lord of the Rings and Smaug’s devastation of Lake Town. But look into English history and we find William the Conqueror’s Harrying of the Anglo-Saxon North in the winter of 1069-70 when, in retaliation for an uprising the previous year, William ordered his army to destroy the north of England and kill everything that lived. This has all the hallmarks of a powerful king’s act of vengeance. It was the calculated destruction of a vast area of Anglo-Saxon England, first by fire and then by famine. Those who survived the burning of villages and farms, the slaughter of livestock and the destruction of winter food supply and seed corn would be faced with starvation through the winter and into the spring. And in case you didn’t notice, that looked to me like snow drifting down on the ruins of King’s Landing at the end of ‘The Bells’.

TWO: Westeros physically resembles the Island of Britain. Not Ireland, or Iceland or Australia or any other large land mass surrounded by water. It looks like Britain.

THREE: Westeros has Seven Kingdoms: the North, The Iron Islands, The Vale, The Westerlands, The Reach, The Stormlands, and Dorne.  Like Westeros, Anglo-Saxon England had Seven Kingdoms, known as the Heptarchy: Northumbria, Mercia, East Anglia, Essex, Wessex, Kent, and Sussex.

FOUR: In the North, Martin has placed the wall—a massive, ancient edifice, the largest structure ever built by the hands of men. It is seven hundred feet high, and visible from miles away—“a pale blue line across the northern horizon.” In Game of Thrones Jon looks up at it, “…blazing  blue and crystalline in the sunlight..Centuries of windblown dirt had pocked and scoured it, covering it like a film, and it often seemed a pale grey, the color of an overcast sky; but when the sun caught it fair on a bright day, it shone, alive with light, a colossal blue-white cliff that filled up half the sky.” The wall was erected to keep the wildlings and the almost-mythic Others out of the Seven Kingdoms.

Martin has claimed that the inspiration for his great northern wall was Hadrian’s Wall. It was built by the Romans in 122 A.D. to mark the limits of Rome’s empire and defend the southern lands against the wild Pictish men of the north who successfully resisted Rome’s iron fist. Hadrian’s Wall spans the width of England for 73 miles, from the River Tyne in the west to the Solway Firth in the East. Historians believe that it was covered in plaster and white-washed, so that its shining surface would have been visible for miles.

Built of stone, it is ten feet wide and anywhere from 16 to 20 feet high, which seems a far cry from the massive edifice in Game of Thrones. But portions of the middle section of the wall lie atop a high, rocky cliff of basalt known as the Whin Sill, and it is an impressive sight.

Hadrian’s wall, too, had strongholds: 80 mile-castles strung along its length that were garrisoned by Roman troops. And, like the strongholds in Game of Thrones, each mile-castle guarded a gateway through the wall.

By the time the Anglo-Saxons settled in England, the wall would have been long deserted by its builders, not unlike Martin’s wall; but it would still appear threatening – perhaps the work of giants. It would certainly have made a strong impression on the Anglo-Saxons.

FIVE: The northern tribes beyond the wall, as noted above, were the Picts; their name possibly meaning ‘painted ones’ – referring to tattooing on their skins. In the 6th century the Irish colonized some of the Pictish lands, and after that the Angles and Britons settled the area—tribes at times united against their southern neighbors  – not unlike the wildings of Martin’s tale. It strikes me as no accident that Tormund Giants Bane looks like a Celtic Scot.

SIX: Martin’s Iron Born, who are consummate seamen and raiders, resemble the Viking raiders who ravaged Anglo-Saxon England from the 8th to the 11th century.

SEVEN: Petyr Baelish, royal counselor and master manipulator, bears some resemblance to the 11th century Eadric Streona. He, too, was a royal counselor and manipulator, notorious for his complicity in various political crimes involving acts of subterfuge, treachery and murder. Ambitious for power and presumably smooth-tongued and persuasive, Eadric wed the daughter of an Anglo-Saxon king and amassed enormous wealth– his by-name means The Grasper. In the end, he fared no better than Little Finger when one of those he betrayed commanded that he be rewarded with the business end of an ax.

EIGHT: The whole concept of Game of Thrones—a battle for control of the Seven Kingdoms—is a reflection of centuries of conflict among the seven kingdoms of Anglo-Saxon England for ascendancy over each other, culminating eventually in the supremacy of the royal house of Wessex in the south. However, the Anglo-Saxon kings who ruled England from the Channel to the Scottish border in the 10th and 11th centuries never had to sit on an iron throne. 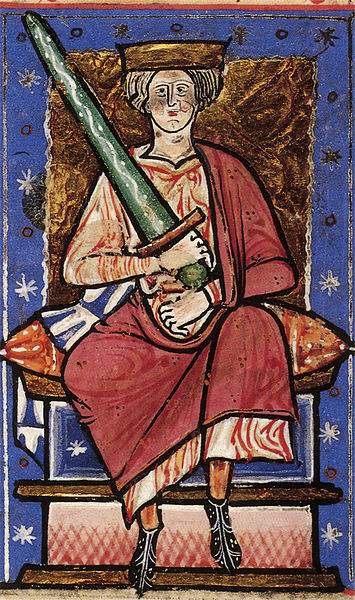 Anglo-Saxon king of England, Aethelred, carries a big sword but sits on a pillow.