This is the episode in which nobody dies in battle, but four characters are murdered; in which Floki works a minor miracle; and in which the gentle Judith turns into Lady Macbeth. I’m going to summarize events quickly because I want to get to the Portage of the title.

Let’s begin in Wessex, where King Ecbert the Awesome returns triumphant from battle, having defeated all of Kwenthrith’s enemies – or so she thinks. “I’m queen again!” she crows.

She’s wrong, of course. Ecbert is no chivalrous knight, charging into battle for the sake of his lady fair who, we know, is neither a lady nor fair. He did it for himself. And as he pores over a gorgeous map of early medieval England he breaks the bad news to Kwenthrith.

An aside: I LOVE that map. I so want to believe that something like it actually existed, despite the fact that no maps of England earlier than the 14th century have survived.

But back to Kwenthrith, who responds to Ecbert’s announcement that he’s King of Mercia now by calling him a monster and who can blame her? Such a disappointment. Realizing that Ecbert is no longer of use to her and is, in fact, a threat to her and to her children (including Ecbert’s unborn grandchild in her belly), she decides to slip away.

Failing that – and she fails miserably – she sneaks toward the king’s bedchamber one night with mischief on her mind. Ecbert’s guard Wærferth tries to stop her, of course, but he’s not wearing any armor and she leaves him behind, bleeding his life out. Well, we’ve always known that Kwenthrith was a nasty piece of work.

Climbing aboard the king as he sleeps, she wakes him, gloating that once she’s killed him her unborn child will be the future king of Wessex. That’s presuming the child is a boy, of course. And that her sweetie Æthelwulf, his son Æthelred, the adorable Alfred, and the three other sons that Æthelwulf had but who don’t appear in this story don’t get in the way. None of that matters in the end, though, because Judith in the guise of Lady Macbeth arrives in the nick of time.

I was a little disappointed that Ecbert didn’t show more gratitude toward Judith, considering that she’d just saved his lying hide. But now that he’s king of both Wessex and Mercia, he must believe that her intervention on his behalf is merely his due. Men!

Speaking of men, over in Kattegat Halbard is offering his services to every woman in town, sometimes two at a time, and when Aslaug finds out she throws a royal hissy fit. It does her no good. He insists that he’s a healer and a prophet, and must do his thing. Aslaug is the only one who didn’t see this coming, and I don’t know about you, but I have trouble dredging up any sympathy for her.

But now let’s talk about something pleasant: Paris. Have you noticed that almost every scene set in Paris involves food? At least, whenever it’s not taking place in Odo’s creepy dungeon?

So, Odo warns the king not to trust Rollo; Rollo warns the king that Ragnar is not defeated as long as he still can breathe; Gisla simpers that she’s carrying Rollo’s child. The king looks goofily inscrutable, but the king is nobody’s fool. He decides to give the count his just reward at the hands of the slimy Therese and her slimier brother. I am absolutely thrilled that Odo’s sadistic story line is now behind us. Whew.

And now, at last, we come to the title of this episode: Portage. Everybody is blaming Ragnar for the defeat outside of Paris in Episode 7, and they’re right. But he responds by pulling a brilliant maneuver out of thin air. He proposes to haul the ships out of the water, up a cliff, and around Paris, then drop them back in the river and attack Paris from the north. And when he turns to Floki to ask if he can do it, Floki cocks his head to one side, as he always does, and says yes, Ragnar. Anything for you. And although we don’t believe that for a minute, for the rest of the episode, the Vikings are busy with their ships. And what Floki does looks amazing.

But it raises the question, Is this historical fiction, or is it fantasy? To answer that, here are a couple of quotes from The Viking Art of War by Paddy Griffith.

“Their boat portages, tactical canal-building and harbor-mouth boom-laying must have been organized in at least a rough equivalent to an ‘engineering spirit’…Even if we look no further than the Vikings’ boats and sailing skills, therefore, we are forced to admit that they must have known quite a lot about the basic principles of civil engineering.”

“Whether they came by sea or land, it was this ability to move armies with speed, surprise and precision which became an important feature of the Vikings’ art of war. It was the ‘pop-up’ factor which gave them many of their best victories…”

The Vikings were, indeed, resourceful in the overland portaging of boats, and we’re not talking about hauling a boat just a few yards here. We’re talking miles. So, yes, there is historical precedence for what Floki accomplishes in this episode at Ragnar’s request. 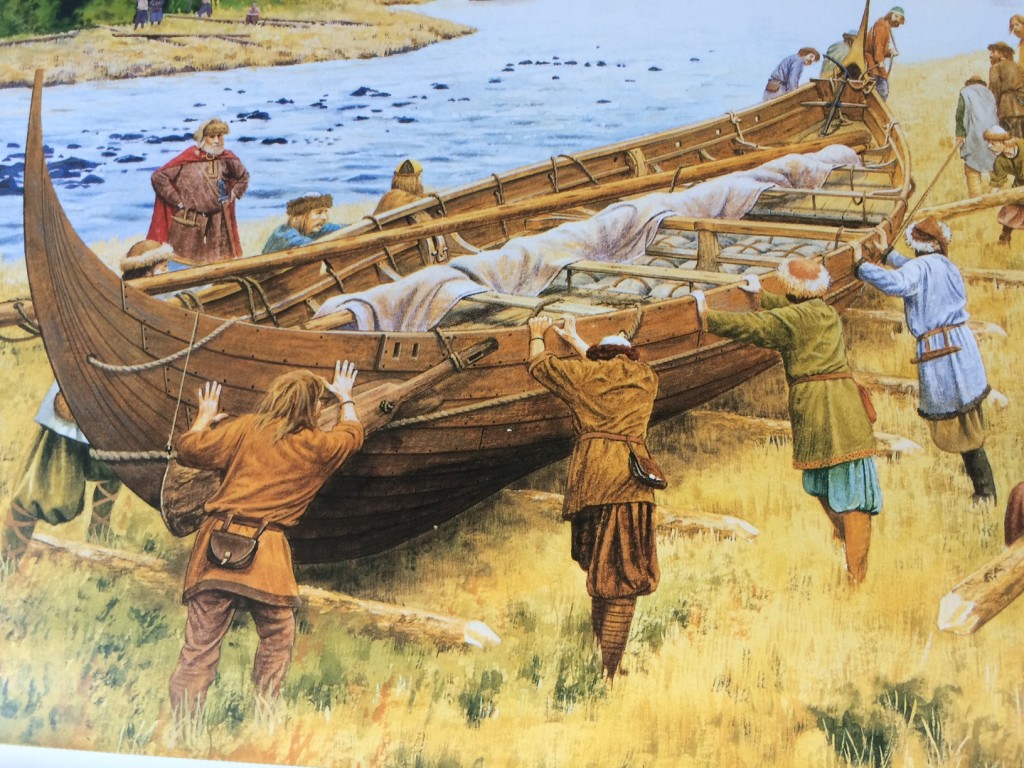 As for Ragnar, he’s still suffering from the effects of the betelnut leaves that Yidu has been feeding him. She’s run out of the stuff now, and you would think she would know better than to taunt someone who is as edgy as a cat on a hot skillet; but no. (Note: Since writing this, I have heard an interview with Dianne Doan, who played Yidu. Dianne’s thinking is that Yidu knew what would happen when she taunted Ragnar, and she did it on purpose. She wanted to be free, and suicide was her only option. This certainly adds depth to the scene.)

There are witnesses to Ragnar’s response to Yidu’s taunting. When the deed is done, he finds that his young sons Ubba and Hvitserk are watching.

And they are learning.