That pretty much says it all, but here are a few details.

It’s Yuletide. Yule. Jul. Jol.
The residents of Kattegat celebrate the mid-winter festival by painting their faces and parading with torches.

They reminded me of a group of players I saw in London two years’ ago doing that exact same thing. 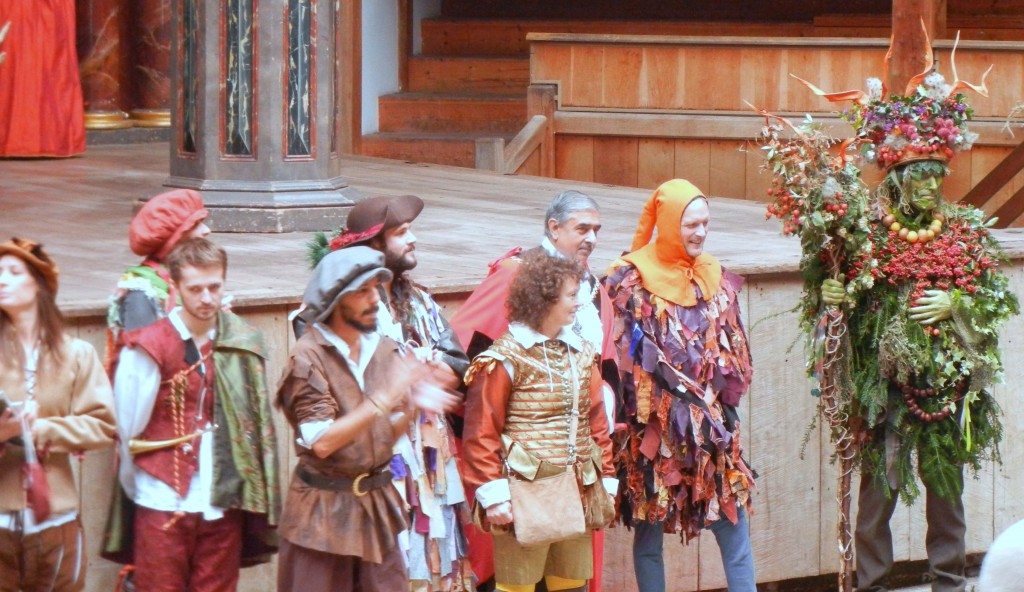 But Floki is not in a party mood.
Instead he goes to see the spamaðr, who speaks to him in his usual riddling fashion; but the tete-a-tete ends with the spamaðr licking Floki’s palm. This is interesting. Usually, it’s the spamaðr who gets his palm licked by those who consult him, so I’m guessing that his words and this action indicate that Floki will step into the spamaðr role. Later, Aslaug brings Ivar to Floki and asks him to teach the boy about the gods, and this too seems to underscore Floki’s latest career move.

Ragnar receives two Jol presents. Aslaug gives him her pretty slave Yidu, and Yidu gives him a hallucinogenic drug to ease the emotional pain she senses exuding from him. It leads to the bout with the snake, as well as some other weird behavior. But there’s an underlying theme here, similar to something going on in Wessex.

Yidu resents being a slave; Ragnar sets her free. In Wessex Judith has bargained with King Ecbert for her freedom so that when her father rebukes her as a bad wife and a bad mother, she defies him. I am free, she says.

But we have to wonder if either woman is really free. Ragnar tells Yidu that she is free to stay or to go. But, go where? She doesn’t even know where she is. Judith claims she is free, but she is only as free as the men whom she answers to will allow. There’s no telling where this particular thematic thread will lead. It may go no further than to equate the daughter of a king with a captured slave. The medieval woman’s lot.

Bjorn, being smarter than the average bear (sorry), outwits the troll sent to kill him.

When he asks the troll who sent him the fellow does not answer, and since we have never heard him speak, we have to wonder if he is capable of speech. This confrontation appears to have been Bjorn’s ultimate challenge, so he returns to Hedeby and then to Kattegat, looking more Ragnar-like than we’ve ever seen him.

Over in Paris Rollo confounds Gisela and the entire Frankish court by speaking to them in their own tongue. He gives Gisela an arm ring and convinces her that he is not a beast. She softens toward him and, well, you know. Later she dolls herself up and they celebrate the Yule together in the buttery beneath the hams. Did anyone else think that she looked frighteningly 21st century, as if she’d just stepped off the cover of Vogue? It was a stunning transformation and looked like it belonged in some other show.

About Gisela: Writer Hirst, I think, has decided to give Rollo just the one wife. Historically Rollo had two, and it was the second wife, Poppa, who was the mother of his son, William. But just as Judith over in Wessex is a combination of Æthelwulf’s two wives, (and really, you know, she is NOTHING AT ALL LIKE EITHER OF THEM) Gisela is a combo-wife as well.

We’ve pretty much left historical accuracy behind, and Hirst is just manipulating characters and events to suit himself. Enjoy it for the entertainment factor, but don’t give it much historical credence.

Finally, in Kattegat we have a new antagonist. King Harald Finehair arrives to challenge Ragnar.

Historically, Harald united southern Norway under his rule as a result of the battle of Hafrsfjord, so we may be heading in that direction this season. But Harald hasn’t made a good beginning. Aslaug’s suspicion radar is on high alert, young Ubba beats him at Hnefatafl, Bjorn bristles at just the sight of him, and in the final moments of the episode Ragnar, spotting him, says “And you are?” with his menacing not-quite-a-smile that always sends chills down my spine.