April 19: The Feast of St. Ælfheah 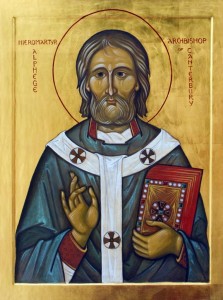 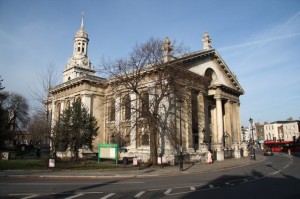 On April 19 in A.D.1012 the Anglo-Saxon Archbishop of Canterbury, Ælfheah (Alfege) was brutally murdered by a Viking army encamped at Greenwich. The English immediately named him a martyr, and a church was built on the spot where he was stoned and bludgeoned to death. The church itself has an interesting history. The first building was erected not long after Ælfheah’s death. A second church was built in about 1290, and it was here that King Henry VIII was baptized in 1491. That church collapsed during a storm in 1710, and the current St. Alfege Church was begun 2 years later.

But back to the Archbishop, whose imprisonment and death are an intriguing puzzle to this historical novelist! Our mystery begins in 1009, when a huge Viking army threatened Canterbury. The canny folk there – and this must have included the archbishop because Canterbury was the ecclesiastical capital of England even then – paid the raiders 3000 pounds to leave. The bad guys didn’t go very far, just over into the next county, and they stayed in England, raiding and burning, for the next three years. At last, in A.D.1011 King Aethelred II promised to pay the Vikings 48,000 pounds if they would just go away. The raiders settled at Greenwich and waited for their treasure to be delivered. 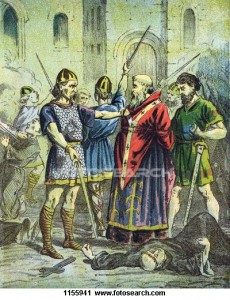 Something happened, though that drove the enemy army to break their truce and attack Canterbury in September, 1011. The city was filled with ecclesiastics, perhaps more so than usual. Possibly they had come for the great feast of Roodmas on September 14 (that’s me, guessing). They entered the city through treachery, burned the cathedral precincts, slew many people and took hostages for ransom. One of those hostages was Archbishop Aelfheah. But the question remains: what made the Vikings break truce and attack in the first place? Nobody knows.

Nor do we know the fate of the other hostages – including an abbess, abbots, a bishop and probably anyone in Canterbury with any wealth that could be used to pay their ransom. We know that Archbishop Ælfheah was taken to the Viking camp at Greenwich and held there for 6 months. All that time he refused to pay any ransom and would not allow anyone else to pay it. 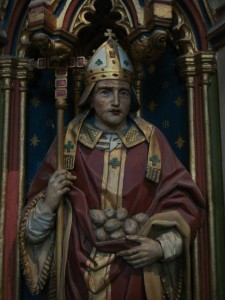 St. Ælfheah holding the stones of his martyrdom. Photo by http://aclerkofoxford.blogspot.co.uk

And here is where things get even more puzzling. Ælfheah was well known in royal circles. Before he was appointed to Canterbury, he had been the bishop of Winchester which in those days was the Royal City of England. He would have been on close terms with King Aethelred II from the time that Aethelred was a boy. So here he is, one of the most important men in England, a man with direct links to the throne, and no one lifts a finger to ransom him because he’s forbidden it. So, what did the men of power in England think was going to happen to Ælfheah?

Did they think that the Vikings would just let Ælfheah go? Did they expect the Vikings to take the archbishop with them and sell him as a slave elsewhere? Was there any attempt made to negotiate for his safe return to Canterbury before paying that 48,000 pound ransom? Did they even imagine that such a man would be so brutally murdered? We don’t know, and that’s one of those historical gaps where historical novelists love to play.

Right, so meantime, as agreed, the English are gathering the 48,000 pounds they’ve promised to pay the bad guys to leave, and they make the payment on or around Easter Sunday, April 13, 1012. And on the night of April 19, when the Vikings were drunk on wine…

…they overwhelmed him with bones and horns of oxen; and one of them smote him with an axe-iron on the head; so that he sunk downwards with the blow; and his holy blood fell on the earth whilst his sacred soul was sent to the realm of God.
The Anglo Saxon Chronicle 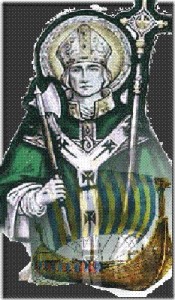 3 Responses to April 19: The Feast of St. Ælfheah