VIKINGS Episode 9: The Choice (or Here Comes the Cavalry?)

There were two high points in this episode for me. The first was the pitched battle between the Vikings and the combined forces of Ecbert and Aella.

The film crew did a masterful job. It was the best battle scene yet. Ecbert makes a brilliant move by utilizing tactics pulled from Caesar’s wars that Athelstan has been translating for him. And there is some historical precedence for Anglo-Saxon use of Roman battle tactics, to be sure.

The cavalry, I have to admit, looked great. I think they may have been anachronistic by two hundred years, but gosh, they looked great.

Caveat: everything I know about horses being used in warfare I learned from books. I am not a horsewoman, and I turn to experts when it comes to equine anything. One thing I’ve learned from books, though, is that fighting from horseback demands special equipment and intensive training for both horse and rider.

The destriers of later centuries were bred for their size to be used on a battlefield. The horses in pre-Conquest Britain were small and sturdy – good for carrying a man across country to the site of a battle. Once there, the Anglo-Saxons usually dismounted and joined the shield wall. As far as I know, the first use of anything like real cavalry in England was in October of 1066, when William brought them with him from Normandy. 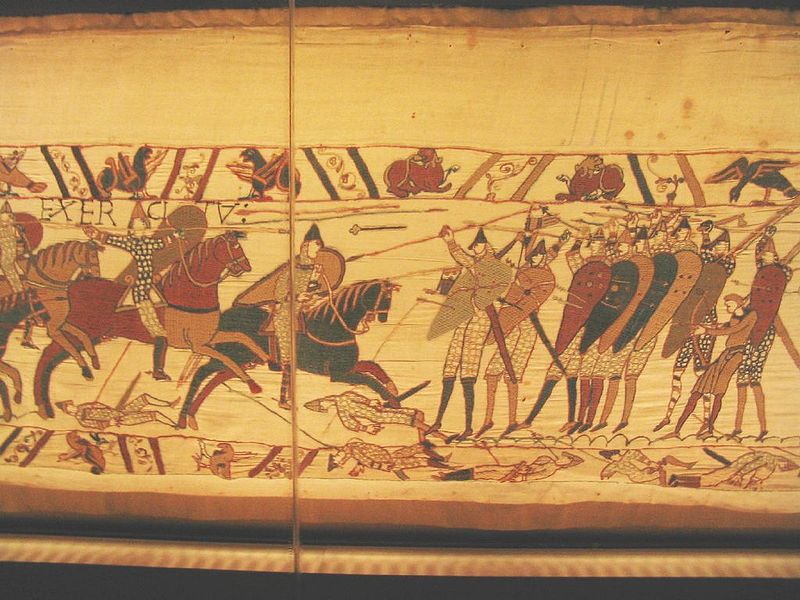 The aftermath of the battle – Englishmen walking the battlefield and putting an end to any Vikings left alive – was pretty realistic. And gruesome. They would have looted the bodies as well for weapons or anything else of value.

After their great victory, King Aella wants to go finish off the Vikings who have not yet sailed away. Ecbert, like Ragnar, wants to negotiate. It’s suggested that Athelstan be sent as an envoy in spite of Ecbert’s fear that the Vikings might kill him. Aethelwulf earns our enmity by quipping, “Would it matter?”

And so Athelstan goes to see the Viking allies, who are not getting along terribly well. Ragnar blames Horik for their defeat, Horik blames the gods, and Lagertha is stuck in the middle. Lagertha speaks for all of them when she agrees that they will attend Ecbert’s council meeting; Ragnar is eager for this of course, and although Horik is against it he goes along.

The second high point for me came right about here, when Athelstan was being protectively shepherded back toward Bath by Ragnar. The monk says something quite lovely:

“I hear God in the rain, and Thor in the thunder.”

Yes, Athelstan is still conflicted, torn between two gods and between his admiration and affection for two men: Ragnar and King Ecbert. I know just how he feels. I have the same problem – well, with the men, anyway.

Ragnar and Ecbert both have leadership qualities which, in the 9th century by the way, included a wide streak of ruthlessness. They are also honorable, each in his own way.

The scriptwriters are doing their best to portray a tender side of Ragnar: his affection for his sons, his concern for the welfare of his brother and his protective attitude toward Athelstan. He’s also concerned for his people, he’s curious, and he’s open to new ideas – all marks of a good leader.

Ecbert is still a bit of a dark horse, but we’ve seen that he’s devout, compassionate, intelligent, also open to new ideas, and a good negotiator. King Ecbert’s use of Danish (Old Norse?) to welcome the Viking envoys was a master stroke! I couldn’t understand a word he said, but I loved it. It goes a long way toward illuminating his character that he would make such a gesture.Writer Michael Hirst you are awesome!

King Aella, to his dismay, is sent to the Vikings as a hostage while the council is going on. It crossed my mind that Princess Kwenthryth would have enjoyed taking his place so she could hang out with a gang of brawny Vikings, but the script writers didn’t go there, thank goodness.

She made her presence felt in other ways though, and frankly I don’t see her as having much in common with any historical Anglo-Saxon women that I’ve run across in my research. She’d feel right at home in ‘Game of Thrones’ though. She is given a boatload of Vikings to fight for her up in Mercia, while the Vikings are promised land and silver, and so this episode ends relatively peacefully, especially considering how it started out.

Athelstan, having been welcomed by Ragnar, returns with the Vikings to Kattegat. But King Horik is still a thorn in Ragnar’s side, and the king is plotting something nasty with Floki. We’ll find out what it is in the season finale.