VIKINGS Episode 10: The Lord’s Prayer (or My Lips Are Sealed)

I watched the finale of VIKINGS Season 2 the other night, and this post about it will be very short. If you saw it, you don’t need a recap. If you haven’t seen it yet, well, you won’t find any spoilers here. But I am going to mention a few elements that struck me.

To begin with, none of this episode took place in England. Head script writer Michael Hirst seemed to think this was a good idea, but those of us who are fond of Anglo-Saxon England beg to differ. I, for one, am already going through Ecbert withdrawal.

On the other hand, we were treated to some awe-inspiring scenery this week. Brief glimpses, mind you, but gorgeous. WHERE, I wanted to know, IS THAT???? I’m sure I wasn’t alone.

High marks to Mr. Hirst and his team for the story line and the script. This was masterful, edge of your seat television, and as I think back over previous episodes I realize that they’ve been building toward this for weeks.

That being said, I do have one beef about this script, and that is: SWEIN FORKBEARD!

In a conversation with Horik’s wife, Lagertha casually namedrops Swein Forkbeard. Hey, script writers! That’s my territory. Now it’s personal! Swein Forkbeard is a historical figure from the late 10th and early 11th century who harassed the heck out of Æthelred II. Lagertha can talk about any Swein she wants, but his byname had better be Longshanks or Fairhair or Lacknose. There’s only one Swein Forkbeard, and he doesn’t belong in Ragnar’s Kattegat, even in a throw-away line. 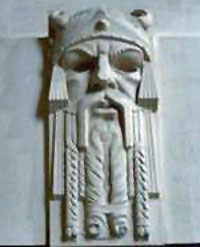 The One, The Only: Swein Forkbeard

This was a great show. If you’ve already seen it, I highly recommend you go to the History Channel website and take a look at Michael Hirst’s 2 minute video about it.  And now we only have to wait until 2015 for the next episode.