When A Royal Affair was released in 2012 (Danish, with subtitles) I was intrigued by

the positive reviews and especially by the story line: a young foreign bride marries a troubled king but falls in love with another man.

If you think it sounds similar to my novel, SHADOW ON THE CROWN, you would be right. Only, the king in question is 17-year-old Christian VII of Denmark, the queen is his 16-year-old English bride, Caroline Mathilda, and the queen’s lover is the king’s German physician, Johann Struensee. The setting is 18th century Copenhagen, and this film is a costume drama as sumptuous as anything you’d see in The Tudors or The Borgias. 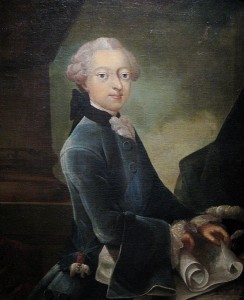 I must admit though, the first 20 minutes of the movie did not captivate. We’re presented with a goofy-looking king whose bizarre behavior includes hiding behind trees and, in the bed-chamber, jumping his bride’s bones with hardly a hello. No matter how arresting the sets and costumes, this did not inspire confidence. My husband lost interest and fled the room. As I am made of sterner stuff when it comes to costume drama, I hung in there, and I’m glad I did. This is a wonderful film.

Once the physician entered the picture I was drawn into the relationships between the three main characters. Struensee and Queen Caroline were immediately sympathetic, but even Christian — so disgusting at first — demanded my compassion.

“Do not stand in my light,” he tells his young, beautiful, intelligent bride who, on her first night in Denmark, has captured the admiration of the court. It is a childlike plea, and all through the film Christian is so like a child — petulant, willful, even violent when he is confused or angry. He has flashes, though, of stunning insight that are unsettling hints of a brilliant mind damaged and shuttered by his illness.

The film has strong political and philosophical themes — it is the dawning of the Enlightenment in Denmark. Political factions are jockeying for power within a beautifully-rendered world that is about to implode. This is a love story, as well, although the film is not, strictly speaking, a romance. It is straight historical fiction, so don’t expect a happy ever after, although the ending satisfies in its way.

What is most astounding about this film is that it is historically accurate: the young queen, the troubled king and the physician lover all existed. Truth that is just as strange as fiction. Perhaps more so. Highly recommended.